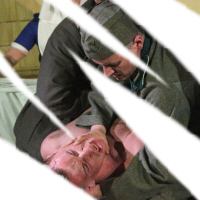 The title of Claudio Macor's Savage surely refers to whatever sadist decided a poky room over the Arts Theatre was fit for purpose as a performance space. In my one previous visit to Above The Arts, the venue's notorious overheating problem seemed to have been mostly resolved, but tonight it was clearly back with a vengeance. Between the buckets of sweat, the acoustics that favour every other room in the building apart from the one we're in, and sightlines that, I would estimate, leave about four or five seats with an unimpeded view of the action (mine wasn't one of them,) and the sooner that long-promised remodeling of the theatre comes along, the better - especially if this unloved second space ends up getting remodeled right out of existence. In circumstances like these, any positives the actual play itself might have, if any, are pretty hard to spot.

Inspired by an article by Peter Tatchell, Savage looks at Dr Carl Værnet (Gary Fannin,) a Danish doctor obsessed with finding a "cure" for homosexuality, who when Denmark was occupied by the Nazis saw his opportunity to get backing for his project, and plenty of unwilling test subjects in the concentration camps. 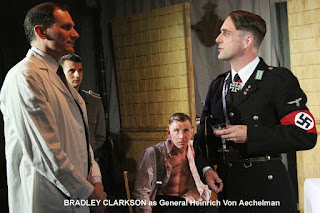 Macor's story follows Nikolai (Alexander Huetson) and his American boyfriend Zack (Nic Kyle) when the former is arrested by the Nazis and taken to Værnet to have testosterone forcibly injected into his testicles, while the latter's diplomatic immunity allows him to escape, continuing to try and contact Nikolai from France but coming up against a brick wall. It's a relationship that should form the heart of the play but in a curiously cold and distant production it doesn't generate much emotion - of course it would take a lot more than is on offer here to make an impact over the sound of the American Idiot rehearsal downstairs, and the herd of stampeding rhino upstairs. 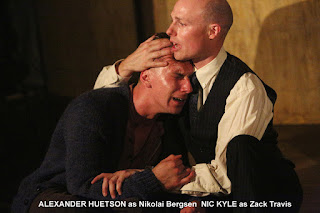 The article that inspired the play is just over a year old, and the speed with which Savage made it to the stage shows in a bloated script that can't decide whether it's about the divided couple, the insane doctor, his conflicted nurse (Emily Lynne,) or the fourth story strand about a Nazi General (Bradley Clarkson) who encourages Værnet in his torture of gay men by day, and by night shacks up with his prisoner Georg (Lee Knight.) Macor also directs his own play, meaning there's no outside influence to tighten its themes up a bit, while the story doesn't always make sense - Zack seems to find it incredibly hard to locate Nikolai after the war, considering he HAS THE NUMBER OF THE FLAT WHERE HE'S STAYING, AND HAS SPOKEN TO HIM ON THE PHONE THERE BEFORE. 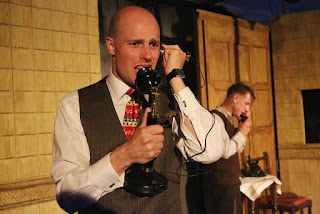 The numerous storylines also mean we end with a severe case of multiple ending syndrome, I was never sure how much more was left to be tied up in the last half-hour (the theatre's website misrepresents the running time to the tune of 25 minutes.) In the end the play has to resort to an epilogue to let us know it was ultimately about the fact that the Danish and British governments allowed Værnet to escape to Argentina (inferred to be because their own homophobia meant they sympathised with his experiments.) 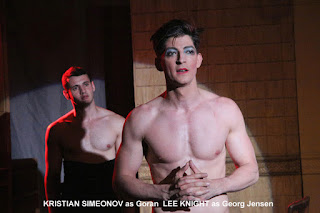 The production is also infuriatingly blocked, with the action geared entirely towards about one-third of the audience, while those of us to the left of the central pillar were mostly treated to actors' backs, and frequently the entire action was blocked from my view by the cast themselves (including during the
FULL-FRONTAL MALE NUDITY ALERT
from Huetson and Knight; although I could see enough to tell that the Nazis had kindly provided Nikolai with a razor and shaving cream to keep his downstairs area squeaky clean.) Sadly not quite as much flesh on show from Kristian Simeonov in various smaller roles, although his turn as a club dancer does make him a definite candidate for this year's Best Nipples award. But shallow stuff aside, this is a potentially interesting subject - the Nazi attack on gay people is often forgotten, and this is a brutal corner of little-known history - that unfortunately gets a rather underbaked, overstuffed melodrama as a stage treatment.

Savage by Claudio Macor is booking until the 23rd of July at Above The Arts Theatre.