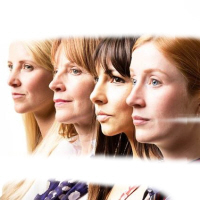 Not actually a Rachel Stevens jukebox musical, Some Girl(s) is a Neil LaBute play whose London premiere starred David Schwimmer - a fact that seems to have been kept in mind when casting Gary Condes' revival at the Park, as a vague resemblance is the only reason I could think of for a crucial piece of miscasting. Guy (Charles Dorfman) is about to get married to a much younger woman, but we never actually meet his fiancée: Instead we follow him around the USA as he visits four ex-girlfriends he feels he has unfinished business with. First up he returns to Seattle where he grew up, to see how his high school girlfriend is getting on - and perhaps to gloat a bit, as he's now a university lecturer starting to make a name for himself as a writer, while Sam (Elly Condron) has married the manager of a supermarket.

Dreams of number one last forever but Guy soon moves on to number two, to Chicago where he did his postgraduate degree, and Tyler (Roxanne Pallett,) still something of a wild child and the only one of his exes remotely pleased to see him again.

Lindsay (Carolyn Backhouse) was promised a future with Guy - well, some girls always get what they wanna wanna but all she seems to get is the other other, because not only did he have an affair with his married colleague while teaching at Harvard, then vanish when they got found out, he added insult to injury by publishing a story clearly based on their relationship. Lindsay has a plan for revenge, though, and her husband is waiting in the hotel car park.

Guy is a typically unlikeable Neil LaBute man, and Dorfman's wooden performance doesn't help make sense of how he managed to charm all these women the first time around - especially since, unlike some LaBute women who are just ciphers, this quartet feel distinctive and well fleshed-out. A lot of that comes from the well-cast actresses, their performances only getting better as we move towards the big "one that got away," Carley Stenson's excellent Bobbi, Guy's L.A ex. Their performances are particularly impressive given they've got so little to play against.

Condes' production has the energy further deflated by PJ McEvoy's set, which does cleverly turn into four very different hotel rooms (only the minibar stays in place - champagne makes it taste so much better but mostly Guy just offers his exes water) but it takes an army of stagehands several minutes to make each changeover. This won't last for long, not forever, but it starts to feel like it. And given the script includes a line about hotel rooms all looking very similar, it doesn't even seem necessary. In the end Guy is too unlikeable and his motives too vague for Some Girl(s) to feel like it has much to say, but a great quartet of actresses led by Stenson rescue the evening.

Some Girl(s) by Neil LaBute is booking until the 6th of August at Park Theatre 90.