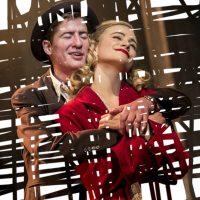 This Christmas the RSC will be using a CGI projection to play Ariel in The Tempest, but if you can't wait that long to see a barely-humanoid homunculus on stage there's always Pixie Lott's performance as Holly Golightly in Breakfast at Tiffany's. In a weird coincidence, Nikolai Foster's touring production sets down in London for a few weeks at the Theatre Royal Haymarket, the same venue where a completely different adaptation of Truman Capote's novella (starring Anna Friel, like I just got home, Anna Friel) played only seven years ago. Without looking it up, I remember that as being a decent commercial if not particularly critical success, so I was a bit surprised to see it given another go with an untested "name" in the lead (there seems to be quite the rotating cast of actresses sharing the role for the regional dates, but just Lott for London.) An unnamed narrator whom Holly nicknames "Fred" (Matt Barber) tells the story of how, while much of America was focused on Europe and the Second World War, he moved to New York for the first time to try and make it as a writer.

Moving into a run-down brownstone, he becomes caught up in the world of Holly, the prostitute* and wannabe socialite who lives in the flat below his, and who climbs up the fire escape and in through his window. 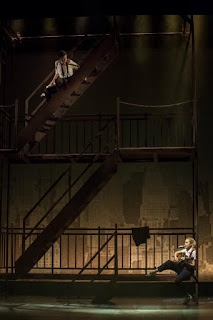 Foster's production uses an adaptation by Richard Greenberg, who keeps much of Capote's original language by making his play heavy on narration - far too heavy, as the action rarely gets much of a chance to breathe before we go back to Fred telling, not showing the story. Despite being based on the book rather than the film, anyone going to see Breakfast at Tiffany's will be expecting to hear "Moon River" - it gets a couple of reprises here - which may explain the casting of a singer rather than an actor as Holly. Actually as far as the US accent goes Lott doesn't do too badly (Holly's accent is in any case meant to be affected and inauthentic) but her performance is far too measured and cautious. 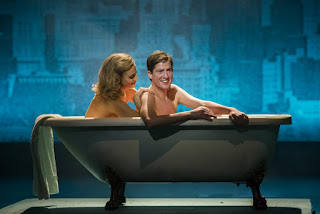 In fact between them the leads have all the raw charisma of a slice of toast, and in a piece that should be largely carried by charm that's deadly. The cavernous TRH wasn't full tonight but neither was the turnout too bad, yet there was little atmosphere in the place (except a couple of times when a cat walked across the stage on cue; to be fair the fact that someone actually managed to train a cat is worth a round of applause even if not much else is.) 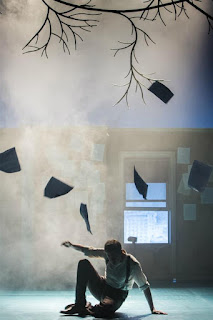 Melanie La Barrie is fun as the deluded opera singer Mme Spanella but the part's pretty much blink-and-you'll-miss-it, so doesn't have much chance of helping the long evening move on. Greenberg does try to offer a bit more of a 21st century perspective on the story, making Fred's homosexuality slightly more overt, and dealing with the film's now-notorious racism by highlighting the fact that Mr Yunioshi (Andrew Joshi) is American by birth, and has relatives who've been put in internment camps. But if a story about the darkness and sadness beneath the charm is missing that charm in the first place, what's the point?

Breakfast at Tiffany's by Richard Greenberg, based on the novella by Truman Capote, is booking until the 17th of September at the Theatre Royal Haymarket; then continuing on tour to Milton Keynes, Bristol, Malvern, Sheffield, Belfast, Cardiff and Norwich.

*"I've had eleven lovers, that doesn't make me a whore, does it?" she asks Fred. He says no, but neglects to point out that the fact she charges for it kinda does.
Posted by nick730 at 23:09