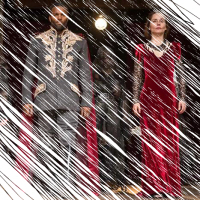 Emma Rice's first season at the Globe is called "Wonder," as in "I wonder where all the shows have gone?" I feel like I've barely set foot in there this summer yet, but in fact I'm nearing the end of the main season. The last of the three shows that make up the majority of the summer schedule is Iqbal Khan's take on Macbeth. Like Rice herself and Caroline Byrne he's been given free rein to break out of the venue's old house style, and like them he gets mixed results. When the Scottish king Duncan (Sam Cox) rewards his best general Macbeth (Ray Fearon,) he little imagines he will take these new honours and seek out much greater ones: A supernatural apparition has foretold to Macbeth that he will be the next king, and his wife is keen for him to speed up the process with a spot of regicide.

I call it a supernatural apparition rather than three witches because in a production dominated by music, the Weird Sisters' prophecies are sung from the musicians' gallery, while actors manipulate masks and puppet parts into eerie shapes. 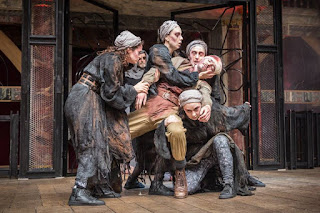 Although opening by strongly creating atmosphere, Khan's production then takes a rather odd turn - most notably in the amount of humour he brings out of the performances, starting with Cox's unusual take on Duncan as a cheery old duffer. It's a risky strategy because while the Globe naturally lends itself to broader performances and comic interaction with the crowd, Macbeth is notoriously short on lighter moments, and an easy one to get the tone of wrong: Play for deliberate laughs early on and you can get unintentional ones from the overwrought supernatural tragedy later. 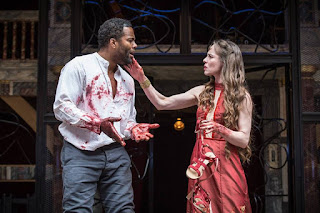 The performances from the leads are also quite stylised, with Fearon going for quite a bombastic declamatory style for his soliloquies, while Tara Fitzgerald gives us a Lady Macbeth who's clearly batshit fucking bonkers (and probably a bit tipsy) from the get-go, dementedly power-hungry and channeling Cersei Lanister (especially in fashion sense.) As we get to the play's one big intentional comedy scene though the production starts to find its feet: This new Globe regime is big on ad-libs and little modern references, and nowhere is that more appropriate than in the Porter's speech, which largely consists of 400-year-old topical standup. 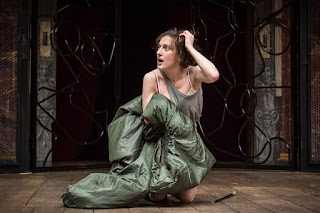 Nadia Albina's Porter is one of the funniest I've seen, keeping most of the original routine but adding digs at everything from Donald Trump to her own disability, while gender-flipping the character lets her get flustered at the appearance of Jacob Fortune-Lloyd's handsome Macduff, and end up greeting him in a highly inappropriate way. Albina gets one of the best receptions of the night, and having succeeded with the big comic interlude the production really starts to find its feet by dropping the broad comedy and building atmosphere (the decision to give the Macbeths a child is the only directorial choice that remains baffling to the end.) 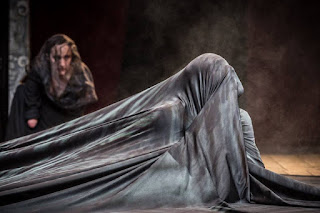 In a move that's been controversial with purists but I haven't particularly minded, modern lighting is now an option at the Globe, and Ciaran Bagnall's design incorporates it*: Together with Jocelyn Pook's Eastern European-influenced choral horror movie music, it helps to give spooky effect to the scene of Banquo's ghost (Jermaine Dominique) arriving at the feast: Emerging through a trap door into a black cloth like a scene from The Frighteners, it's an effective way to show Macbeth seeing something nobody else can. 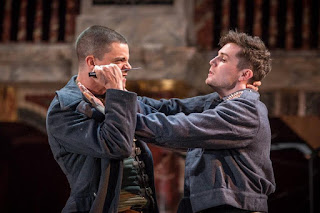 Macduff meeting Malcolm (Freddie Stewart) in England is hardly Shakespeare's finest hour, but at least the fact that they're two of the best-looking actors in the cast‡ helps distract from the mess that is the first half of that scene, while the production pretty much merges Lloyd Thomas' Angus and Seyton into one, making for a sinister henchman who looms behind Macbeth for much of the play. Kev McCurdy's fights culminate in a particularly brutal confrontation⁂ between Macbeth and Macduff that tops off an increasingly successful evening. It takes time to find its feet and doesn't entirely hold together thematically, but this is a Macbeth many of whose individual moments will, I suspect, remain memorable for some time.

Macbeth by William Shakespeare is booking in repertory until the 1st of October at Shakespeare's Globe.

*on the other hand Khan's resisted the option to mic his actors to the extent that other productions have, and the venue's acoustics work the better for it

‡hard to choose between them, but I'm a sucker for anyone who gets super-enthusiastic about the jig, so Stewart edges it on that score

⁂although a few more drops of stage blood wouldn't have gone amiss
Posted by nick730 at 23:45