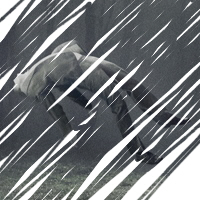 Is it still a coup de théâtre if it happens before the show even starts? On a large proscenium arch stage, a curtain of rain is a dramatic but familiar special effect, but entering the Donmar Warehouse for Brian Friel’s Faith Healer, the audience is met with torrential rain on three sides of the thrust stage, falling just a foot away from the front row. The effect returns a couple of times during the evening to facilitate some quick changes to Es Devlin's set, as Friel's play is made up of three connected monologues, giving complementary and conflicting versions of the same events. First up is the titular faith healer himself, Frank (Stephen Dillane,) an understated showman - the "faith" part of his profession is never mentioned - who tours small villages in Wales and Scotland with his wife and tour manager.

Frank doesn't believe, for the most part, that he can heal people, and even thinks they don't really want him to - instead he thinks they want his failure to get rid of their last painful vestiges of hope. 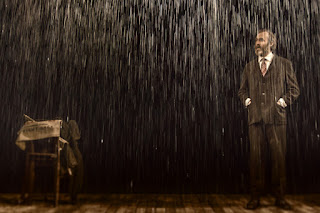 It does seem, though, that occasionally the cures work. We learn of a Welsh village where only ten attended but all ten were healed, and of a smaller event when Frank is convinced to return to his native Ireland after a long absence. This latter event is the precursor to something big, but before we can hear about it the sheet of rain replaces Frank with his wife Gracie (Gina McKee,) who reveals that much of Frank's speech - and not necessarily the more outlandish parts - has been a lie. 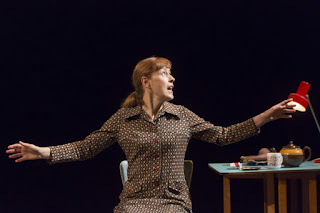 These different takes on the truth are much of what Faith Healer is about, Gracie revealing some of Frank's deliberate lies, but when she in turn is replaced by manager Teddy (Ron Cook,) we hear some of the ways she's misrepresented events even to herself. Lyndsey Turner's production (the director tackling Friel has become an ongoing feature of the Donmar's current regime) is a mixed one. 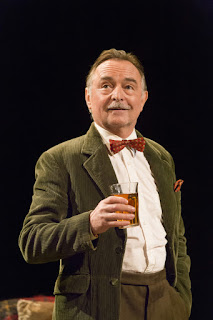 Frank's monologues, which open and close the show, are lyrical but sometimes a bit too weird to entirely hold the attention, and Dillane's delivery is so soft it can veer into the soporific. Better is McKee's vulnerable but enduring Gracie, and best of all Cook's blunt, funny Teddy, exposing his former client's alcoholism while downing endless pints himself, as well as providing some bizarre stories about his past "talent" (particularly a bagpipe-playing dog.) I've never entirely got on with Friel's work and Faith Healer has many moments that struggled to really hold on to my interest, but there are also those whose odd stillness is moving and distinctive.

Faith Healer by Brian Friel is booking until the 20th of August at the Donmar Warehouse.