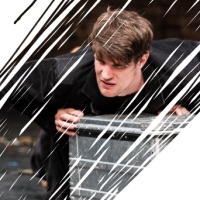 As Anthony Neilson's plays are created in rehearsal, you never know what you're going to get when a new one premieres, even down to what genre it'll be - although odds are something surreal is on the cards. Unreachable has had its press night so is presumably now finalised, but it does at times feel as if the actors are still being taken by surprise. The setting is unnamed, but the character names would suggest somewhere in Eastern Europe, where indie filmmaker Maxim (Matt Smith) has just won the Palme d'Or. This recognition has led to his producer Anastasia (Amanda Drew) being able to secure a bigger budget for his next feature, a dystopian thriller he's wanted to make for the last decade. But the director seems oddly determined to sabotage his own dream project, constantly interrupting and restarting filming - as the play starts he's demanding they reshoot the last three weeks' worth of footage on film as he's gone off digital - as he seeks to capture an elusive, perfect light.

Anastasia manages to find backers to make up the budget difference, but it comes with a caveat - the investors send a representative, Eva (Genevieve Barr,) to keep an eye on the production. If he seems to be wasting their investment, Maxim could end up getting fired from his own film. 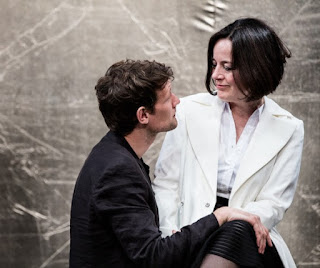 Maxim, who has every intention of continuing to procrastinate, has one more trick up his sleeve: He casts his friend Ivan (Jonjo O'Neill,) also known as The Brute, in one of the lead roles, fully aware that he's a disruptive, mad diva nobody else is willing to work with, and whose behaviour will make it impossible to shoot more than a few frames at a time, without Maxim himself getting the blame for it. Unreachable opens with Natasha (Tamara Lawrance) auditioning for the film with a heart-wrenching scene written by Maxim, but it soon becomes apparent that in real life his sympathies don't extend far beyond his own ego. 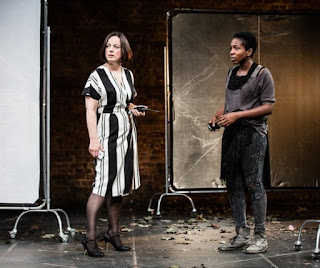 And egos are what the play is ultimately about, an affectionate but very silly take on artistic temperament and self-importance. The three funniest, but contrasting performances come from the three "artists" - Smith's Maxim lounges around the stage feeling sorry for himself, while in complete contrast Lawrance's Natasha is comically blunt, only seeming capable of emotion when she's playing someone else. Halfway through the show, the energy is kicked up an insane notch by O'Neill's outrageously OTT performance as the grotesquely self-important Ivan, full of bizarre non-sequiturs ("I once walked 300 miles to save a fly... I accidentally killed a penguin and sat on her eggs until the zoo kicked me out.") 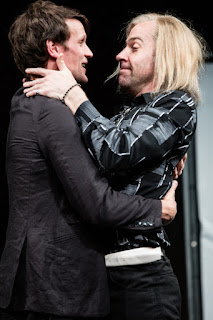 It's a performance O'Neill shouldn't be able to get away with, and only really does because of the chaotic nature of the show as a whole. I wouldn't want to swear that he wasn't still making up some of his lines as he goes along ("Don't speak those syllables with your lizard tongue!") especially as the rest of the cast increasingly border on corpsing - at times O'Neill seems to be challenging Smith in particular to keep a straight face. While these two hams are the show-stealers, everyone gets a chance at a comic moment - Anastasia's expressionistic sex scene with director of photography Carl (Richard Pyros) is... memorable. More than some of Neilson's plays, Unreachable betrays the chaotic way it was created, and despite Chloe Lamford's bare set hiding a final coup de théâtre (yeah, another one of those,) the ending doesn't really hold together. But it's a weird and wild ride along the way.

Unreachable by Anthony Neilson is booking until the 6th of August at the Royal Court's Jerwood Theatre Downstairs.