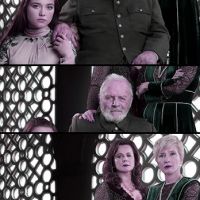 Anthony Hopkins played King Lear in his fifties, in a National Theatre production so famously derided he ended up retiring from the stage. Now 80, he still can’t be tempted back to the theatre but Richard Eyre has tempted him back to Shakespeare and to a role he’s now the exact same age as. A BBC and Amazon co-production, Eyre’s TV version sets King Lear in an alternate present day where Britain is still ruled by the monarchy from its seat in the Tower of London, where Lear invites his three daughters to share out the ruling of his kingdom. Goneril (Emma Thompson) and Regan (Emily Watson) stick to the script and dole out rote flattery, but Cordelia (Florence Pugh) attempts a more casual response which backfires. She finds herself exiled while her older sisters share the kingdom – and the responsibility of caring for an increasingly unpredictable and dangerous father.

The thing about watching a TV version as it airs, especially when it’s been promoted as a major Bank Holiday event so a lot of others are also watching, is that you can gauge reactions straight afterwards on Twitter. The most immediately interesting thing about Eyre’s take is the way it sets out to polarise the audience into support for either Lear or his daughters. In keeping with most recent stage productions, the film eschews the old cliché of Lear as a kindly old king and gives us Hopkins as the explosive, bullying dictator. His failing mental health has exacerbated these traits but Thompson and Watson make it clear they’re walking on eggshells around him. If Pugh’s Cordelia rolls her eyes in disdain for their flattery, it’s because as the favourite she’s never seen the side of him that he unleashes when she fails to do the same. 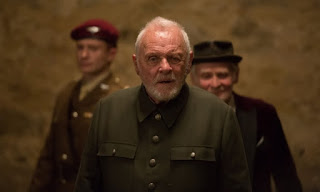 Goneril and Regan have more to worry about than just this: Setting the opening scene in some windowless dungeon in the Tower is a reminder of the fact that, however Lear may try to sell it, this isn’t a gift; his elder daughters are being given all the responsibility of rule while he keeps the perks. I think the closer a production can get to showing the reality of the 100 knights Lear demands, the more unreasonable the request seems. He is essentially ruling that every other month each daughter’s house will be trashed by him and 100 squaddies, and this is before we get to the fact that they constitute a private army at the command of a man who could easily order everyone in the house slaughtered on a whim. With a TV-sized extras budget, and a brutal scene of Oswald (Christopher Eccleston playing nicely against type as the prissy servant) being bullied, it becomes understandable that Lear may be Goneril’s father but he’s gone beyond inconvenience into becoming a real danger, and getting him out of the house at all costs is brutal but pragmatic. 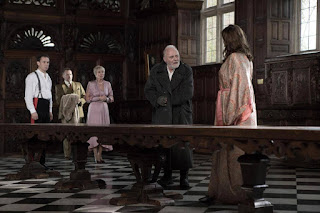 But of course the scales of sympathy start to tip at about this point as the sisters’ treatment of their father starts to take on an unnecessary kind of glee. Regan is the more sadistic in the text, something that gets a particularly twisted interpretation here with the strong implication that torturing people forms a major part of hers and Cornwall’s (Tobias Menzies) sex life. Overall the main thrust of Lear’s story is served pretty well – Hopkins’ is a Lear who’s pitiful by the end but hasn’t, really, learnt anything about how much of what’s happened to him was his own fault – but the major subplot falls victim to the heavy cuts that have brought the film in under the two-hour mark. 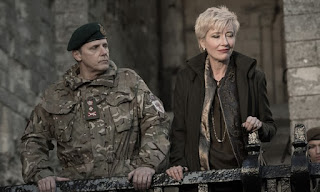 Jim Broadbent’s Gloucester comes complete with curled moustaches, giving him a slightly ridiculous Polonius touch that makes him hugely sympathetic and his blinding traumatising as well as gruesome. I continue to find John MacMillan quite a wooden actor, which means his Edmund was the only real piece of miscasting for me. Meanwhile as his half-brother Edgar, Andrew Scott is somewhat short-changed in trying to make sense of him, as his entire speech explaining that he’s going into disguise as a madman is cut. It means his madness now is real, and then suddenly disappears a few scenes later. 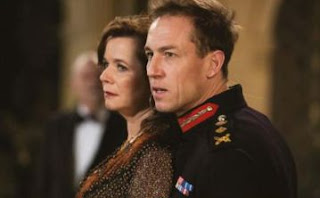 So for me this was a mixed success; at times the opportunity to use techniques you can't on stage were seized very well. The Fool was another character whose role was cut a lot, but Karl Johnson still made an impact, and his death was intimate and sad. A very clever touch early on, as Edmund stands guard and his father and Kent (Jim Carter) discuss his mother as if he's not there could go some way to explaining the character's bitterness. But given the opportunity for intimacy, the middle section of the film feels like a missed opportunity when it becomes a sustained shouting match that started to lose my interest. And though I can see cuts are necessary, I thought they went so far that some of the story and characters got lost. This was a bold attempt to grab a wider audience than Shakespeare usually gets on TV, and I can see that the running time would have been part of its appeal; but with most blockbuster movies seeming to come in well over two hours these days, I think the audience might have been trusted to stick with it just that little bit longer that would have given it some breathing room.

King Lear by William Shakespeare is available on the BBC iPlayer until the 27th of June, and will be available internationally on Amazon.