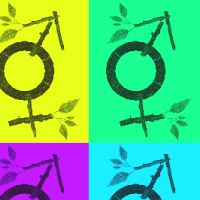 The second show from the Globe’s new Michelle Terry-led ensemble is As You Like It, nominally paired with the Hamlet they’re playing it in rep with as “sibling” plays; to be honest what connections the company have found between the plays aren’t too obviously apparent, but if it doesn’t really come across as a double bill that’s no bad thing because where Hamlet was underwhelming, As You Like It is, well, much more like it. Although the idea of gender-blind casting has been gaining traction in recent years, it’s not often it feels as natural as in these ensemble shows – there tends to be the feel of it mainly being male roles assigned to women to redress the gender imbalance, with the odd recasting the other way so it’s not a box-ticking exercise. Not so in these plays, and particularly this one, where the casting announcement was exciting because it seemed more genuinely gender-blind than anything I’ve seen before: Regardless of gender, the roles assigned seemed like ones I thought would be an interesting match to that particular actor.

And so Rosalind, the biggest female role in Shakespeare, goes to a man. Given that she spends most of the play in disguise as a boy this does bring back to life a lot of the inside jokes about the multiple levels of gender-flipping in the role, but there’s also something specifically pleasing about Jack Laskey, the bastard love-child of David Tennant and Daniel Radcliffe, playing Rosalind: He played her love interest, Orlando, on the same stage in 2009. 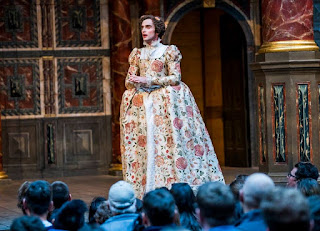 Rosalind is the daughter of a deposed Duke, banished by the new regime, and followed by her cousin and best friend Celia (Nadia Nadarajah) into the forest in disguise. Posing as a man, she bumps into Orlando (Bettrys Jones,) the man she’d fallen in love with back in court, also now on the run. Rather than reveal herself to him, she decides to test his love instead: Still in the guise of a man, she tells him she will pose as Rosalind, and be so mercurial he’ll be “cured” of his love in no time. No, of course it doesn’t make sense, are you new here? 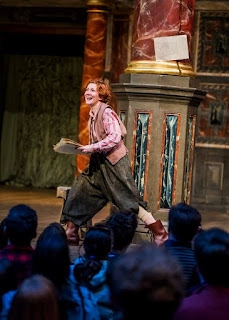 As with Hamlet, Elle While and Federay Holmes’ production doesn’t have a unifying theme or style, but unlike Hamlet it doesn’t really matter: Not only is that sort of thing more forgivable in a comedy, but As You Like It has so many weird intersecting subplots and romances that at the best of times it can seem like a collection of unrelated setpieces. What really works here is that those interesting casting decisions have paid off, led by Laskey really finding the awkwardness of Rosalind’s attempt to pass as a man. Once again Ellan Parry’s costume design comes from the Globe’s store from past productions, which leads to a very pleasing little touch if, like me, you saw Laskey’s last appearance in the same play: His Rosalind-in-disguise outfit is his actual Orlando costume from nine years ago (softened as the play goes on by the addition of a flowery cardigan to help keep up the femininity his character is trying to suppress.) 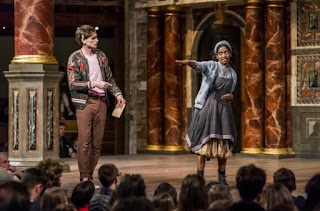 In Jones’ case, it’s not so much the gender-flipped casting as her stature that she uses to get laughs and build her character – having not just a woman but a very small woman beat up first Shubham Saraf’s Oliver then Richard Katz’ Charles made for huge cheers from the audience. And speaking of crowd-pleasers, Nadarajah’s Celia quickly became an audience favourite, and far from token disability-blind casting, her communicating by BSL is turned to the production’s advantage, with funny moments including her trying to play Cyrano for Rosalind, frantically signing behind Orlando’s back. Helen Schlesinger, who only last week I said has a tendency to come off cold, is probably the most out of her wheelhouse here as both Dukes, with a touch of the Maleficent to her gleefully evil Frederick, a Duke Senior dressed as a Wild West sheriff for some reason, and having a lot of fun swapping between the characters. James Garnon on the other hand could not be more at home as the “foul” Audrey, dialling up the grotesque and getting to do some of his trademark extreme audience interaction including, in the hunt scene, threatening to stab a groundling in the face with a spear, which seems to be perfectly reasonable behaviour if you’re James Garnon. 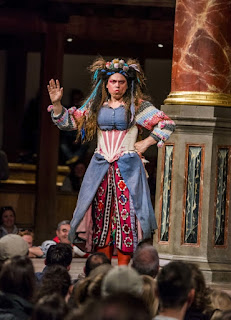 The ensemble was announced long before we knew who was playing what part so we did do some guessing on Twitter – one option we all agreed would work would be Pearce Quigley playing all the roles, with the rest of the cast providing handclaps and playing trees. In the end Quigley has ended up with Jaques, whose famous melancholy is a good fit for an actor with a hangdog air about him, but crucially gives him another opportunity to make lines I’ve heard dozens of times feel fresh with unique, sometimes downright weird readings. Who else would try to launch into the Seven Ages of Man, one of the most famous speeches in Shakespeare, while eating a banana, and by the end of it have burst into tears? As well as the comedy, he also brings to life a genuine sense of the character’s love of the environment and sadness at man’s destruction of it. 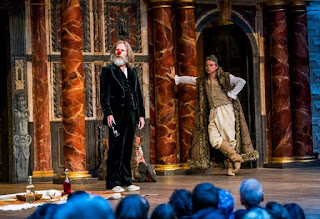 Terry herself has stuck to the overall rule that those playing large parts in one play will only have supporting roles in the other, so she gets a bit of a break from Hamlet to play the elderly servant Adam, who only appears in a couple of scenes, but she still gives him some nice touches. And it’s interesting to see how, when she turns up in other ensemble parts like the gormless William, the appearance of the Artistic Director carries a bit of a frisson of excitement, like a kind of celebrity cameo. Also appearing in a couple of supporting roles, the evening still gave me the opportunity to think how generally underrated Richard Katz is, going from fire-eating wrestler to another of the play’s hapless lovers. 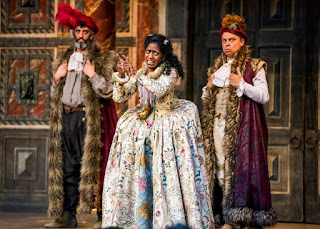 Will this go down as one of my all-time favourite As You Like Its? Probably not, but then that’s a pretty stiff competition. Individually though there’s plenty of outstanding moments and interesting interpretations of the roles, and the company work together organically and well. It’s the way you’d expect this kind of actor-led approach to work, bringing the best out of the cast while not casting a definitive stamp on the production overall, and it’s something that’s likely to keep working better for some kinds of play than others. The overall response to the opening pairing seems to have been muted, but for me I’d say it was a fifty-fifty hit rate: Not enough to call Terry’s version of the Globe’s experiment an instant success, but enough to suggest it could have legs.

As You Like It by William Shakespeare is booking in repertory until the 26th of August at Shakespeare’s Globe.