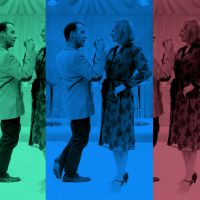 The characters in writer-director Anthony Neilson’s The Prudes know they’re in a play called The Prudes, and they resent the implication somewhat – although Jess (Sophie Russell) thinks it might be fair in the sense that she doesn’t like the idea of dogging (she worries about the dogs being left alone while all the sex is going on and anyway, she doesn’t have a car.) But it’s true that she and her partner of nine years, James (Jonjo O’Neill,) haven’t had sex in 14 months, and they’re here to do something about it. Specifically, they’re here in Fly Davis’ chintzy pink boudoir set to have sex in front of a live audience. But first they need to introduce themselves and give some background to their relationship and its recent intimacy issues – basically, they need to keep talking about anything that’ll put off doing the act itself.

The Royal Court has consciously put itself at the forefront of the theatrical response to #MeToo, and this time one of its regular writers contributes a man’s side of the story, one that turns out to still be quite self-involved, but ultimately well-meaning and confused. 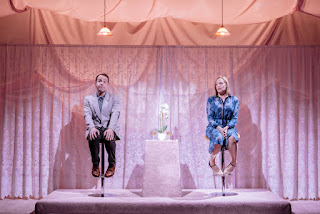 But beyond the wider meaning The Prudes does also work as the straightforward story of a couple who still care about each other and are perfectly happy together in all but this one way. It’s too major a part of their relationship to ignore though, and in a signature Neilson style that mixes the silly with the wise, they rake over their past sex lives and the circumstances that led to things coming to an abrupt halt. Typically, there's a lot of playing with form - as well as coming in knowing they're in a show in front of an audience, the characters later comment on the changes in Chahine Yavroyan's lighting design that signify whether they're having a conversation or monologuing. 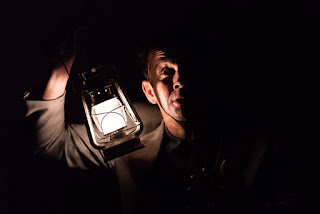 O'Neill has of course worked with Neilson before, and has never been one to hold back from an oportunity to make himself ridiculous; but Russell is every bit as funny if not more so - her delivery of one particular line had me shaking with laughter for a good five minutes afterwards. It's not too surprising that Neilson confronts the historic abuse issues head-on with dark humour: James used to prefer being called Jimmy but changed back to James "because... Savile," and Jess comments that you can change your mind about what you do or don't like - "I used to like Kevin Spacey, for example." But there's funny stuff at every level - the sound effect when a prop descends from the flies is a simple gag that just really tickled me. 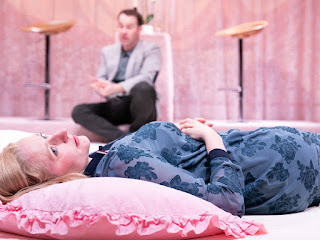 Underneath all the raging unsubtlety there's a genuinely quite thoughtful take on how the sexes have to move forwards if things are going to change: There's no instruction manual and even the most progressive man might not know how to deal with his partner's history of abuse, or how strictly to reevaluate his own past behaviour. (Indeed there's a kind of stereotypically male narcissism to how much James is affected by the revelations both personal and public as if, having found out about it, the problem is now down to him to fix.) In the end, the play says, this is an issue everyone will need to work on together maturely to find the way forward. It's just that it makes this plea for maturity with knob gags and (this being Neilson,) a fondness for dressing actors up as superheroes.

The Prudes by Anthony Neilson is booking until the 2nd of June at the Royal Court's Jerwood Theatre Upstairs.