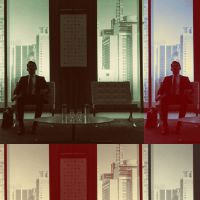 Frank (Jonathan Cake) arrives at the final interview stage for a senior sales job at a Fortune 500 company only to find no interviewers present. Instead Rick (John Gordon Sinclair,) Melanie (Laura Pitt-Pulford, somehow feeling brave enough to return to the Menier Chocolate Factory so soon after an excruciating experience) and Carl (Greg McHugh) join him in the conference room, the other candidates competing for the job. They’re not here for a traditional interview but to be tested for their suitability for a stressful job, according to the rules of The Grönholm Method. Observed, they assume, through hidden cameras or two-way mirrors, a concealed drawer occasionally slides out of the wall containing instructions for the games they have to play – anyone who finds it too much is welcome to leave the room, but they forfeit their chance at the job if they do.

For the most part, the mysterious method takes the form of scenarios they’re given, in which three of the candidates are invited to judge how to deal with a situation the fourth has found themselves in, that may or may not affect their work. But instead of hypotheticals these scenarios are drawn out of their real lives, often digging up information they believed private. 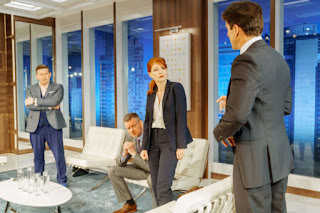 Jordi Galceran’s play has been a hit around the world but taken 15 years to make it to the UK, which may be why it feels as if it belongs to a well-established genre – black comedies about human guinea pigs pushed to breaking point, usually in a corporate environment, by having their deepest insecurities brought out in public. There’s an element of Big Brother (a show that would just have started properly manipulating its contestants in 2003) to the unseen HR psychologists getting the candidates to turn on each other (the first challenge claims one of the four is a member of HR under cover, and the rest have to unmask him or her; but is that really the task, or are they meant to figure out that the instruction is a lie?) The characters get tangled up trying to play the game, while also trying to figure out what the game actually is (do their prospective employers want to see ruthlessness or empathy?) 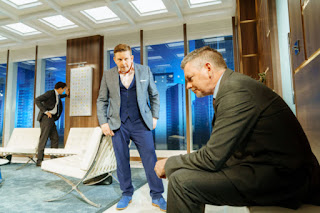 Although all the characters are archetypes to an extent (Frank is the aggressive alpha male bluffing and joking his way through his insecurities, Rick the folksy New Jersey salesman who seems out of his depth but might be playing a game, Carl the Harvard MBA trying to trick and outsmart everyone) Pitt-Pulford seems to have drawn the short straw, if only because the ice-queen businesswoman burying a personal crisis seems to be the default female role in these workplace dramas. 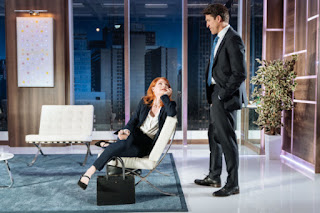 The translation by Anne García-Romero and Mark St. Germain has a New York setting and an up-to-date feel in its language, although a few things jar – while the prejudice against a transgender candidate hasn’t changed enough, the idea that an HR department could give the applicants the opportunity to sack them because of it feels like something they’d never dare do openly now (which is ironic considering the wholesale psychological abuse that constitutes the interview process.) I had a few niggles with The Grönholm Method, not least of all that BT McNicholl’s sometimes too-shouty production is not quite as funny as it could be. It’s constructed like a puzzle, and it’s perhaps too busy pulling the rug out from under the audience to really get round to saying much that’s new. The cast throw everything they’ve got at it and get results, so it’s entertaining but not illuminating.

The Grönholm Method by Jordi Galceran in a version by Anne García-Romero and Mark St. Germain is booking until the 7th of July at the Menier Chocolate Factory.