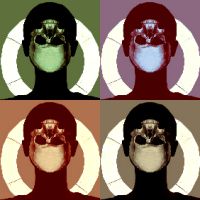 After the “teaser” of the touring Twelfth Night and Shrew, it’s time for the main season as Michelle Terry takes over as Artistic Director of Shakespeare’s Globe. Not only has the venue gone back to having an actor in charge (the first one to hold the post will be returning later in the summer) but the idea of the productions being “actor-led” has been heavily promoted leading up to her first season; in fact the new Globe Ensemble’s first pair of productions were originally announced as being put together without a director, although Federay Holmes and Elle While have since been brought in to fulfil that role. This reliance on actor input is apparent, in both positive and negative ways, in the opening show of the Terry era, and she’s come straight in to take on a challenge, playing the title role in Hamlet*. The Prince of Denmark is in mourning two months after the sudden death of his father, but the royal court around him has already moved on.

The late king’s brother Claudius (James Garnon) has not only taken the throne but married Hamlet’s mother Gertrude (Helen Schlesinger) as well. 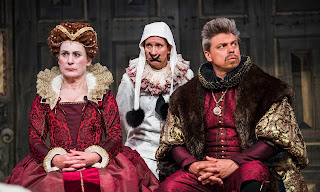 Now a supernatural message tells Hamlet his uncle murdered his father in order to steal his throne and queen, and demands revenge. For the last two years productions of Hamlet have made it into my annual Top Ten, and I was hoping the Globe could make it a hat trick, but it was perhaps too big an ask. Not that there aren’t many strengths here, but the play famously consists largely of procrastination, and needs a firm focus to give it the thriller impetus it can so often achieve. Holmes and While’s production tells the story clearly, but while individual performances come with a lot of interesting ideas there isn’t really much that unifies the production into a single forward drive.

Crucial to any Hamlet of course is the prince himself, and Terry doesn’t disappoint. Cutting a slight figure compared to many of her co-stars, the feature she most brings out in Hamlet is his impotent rage at the injustices around him, and his own inability to do anything about them. For reasons entirely artistic and not because Emma Rice left behind a black hole where the budget should be, the cast have been encouraged to pick their own looks out of the Globe’s costume store, and this results in one of the most visually striking Hamlets in some time: Once he’s decided to feign madness, Hamlet dresses as a tattered Pierrot with a Joker smile slashed onto his face. Heightening the effect of him being buffeted about by fate, Terry’s Hamlet is an angry ragdoll whose rage only collapses in the presence of his father – it was much-noted that Andrew Scott’s Hamlet was actually tactile with him but Terry’s is even more so, clinging onto Colin Hurley’s Ghost and practically hanging off him when he reappears in Gertrude’s closet. 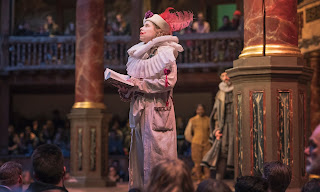 Elsewhere the mix of styles and periods in costuming gives us Schlesinger, always an actor with a fairly dispassionate air, as an inscrutable Queen of Hearts Gertrude, while I can only assume James Garnon actually likes wearing high-heeled Restoration shoes. (Claudius, a character keeping his cards very close to his chest, is not the most obvious fit for an actor usually seen climbing the walls; it’s possibly a role he took on precisely because it would be something different, but on the other hand I can’t imagine anyone other than Garnon somehow managing to play the line “Forgive me my foul murder” for laughs.) More reliable laughs come from Polonius, Richard Katz adding to the character’s awkwardness with the younger people by making a mess of communicating with Nadia Nadarajah’s Guildenstern in sign language, and managing to balance the likeable old bore with the nastier undertone than can sometimes come through. Always one to find a laugh in a different place than you expect it, Pearce Quigley avoids the "people don't know who he is" gag as Rosencrantz, and delivers it instead when playing Barnardo.

Less successful, if not entirely surprising with this actor-led approach, is the way everything holds together, but what is surprising is the way a cast many of whom have worked at the Globe regularly make so little use of the theatre’s unique qualities. The no-frills approach really has stripped the stage back to its bare minimum, with even the steps into the yard removed so audience interaction is minimal – even the musicians’ balcony is barely visited by the cast. From a personal point of view, it makes the cheaper (£22 is the cheapest option, plus cushion rental which has had a 100% price rise this year from £1 to £2†) restricted view seats even worse because every single scene involved trying to see past at least two, sometimes three pillars, whereas productions where the action spills out throughout the building make the sightlines more democratic.

And it’s those moments when the production does embrace the location that most stand out; Terry crouches down at the front of the stage to deliver “To be or not to be” directly to one groundling before her attention takes in the rest of the crowd, making a 1400-person venue feel intimate. And “The Mouse Trap” is a triumph – I’ve often thought the dumbshow, followed by the prologue, followed by the play itself if more than we really need, and after an atmospheric dumbshow the rest is cut. Instead the actors look out into the audience, the beats of the story playing out in ominous drumming that comes from around the circle, which they react to until Claudius finally cracks. In fact the sound (Catrin Aaron’s largely inaudible Horatio notwithstanding) is generally a highlight, James Maloney’s brass-heavy score adding a grand, solemn air to proceedings, and accompanying a memorable BSL-inspired jig. It’s a shame that after a lot of positives the last impression is of a weirdly rushed final scene, Terry even zipping through Hamlet’s last lines with barely a pause for breath. Parts of this Hamlet are likely to stay with me for some time, but the whole doesn’t always come together.

Hamlet by William Shakespeare is booking in repertory until the 26th of August at Shakespeare’s Globe.

*beyond the obvious motives of why someone would criticise Terry in a way I assume a male actor wouldn’t have faced, I don’t understand the argument that her taking this role straight off the bat is arrogant. If a director takes over a venue I wouldn’t expect them to just direct a rehearsed reading and leave the heavy lifting to others, I’d expect them to try and make a splash with their opening show; I’m not sure why you wouldn’t want an actor to do the same, and given the path her career’s taken in recent years this seems the right time to move on to this part. Much of the excitement of Terry becoming AD was knowing we’d get to see her act here at least once a year, why would you actually want to give that up and have her fart around in the background instead for the sake of some false modesty?

†the Globe get a lot of good publicity out of the fact that standing tickets still only cost a fiver after more than twenty years, and you’ll hear a lot about how the Groundlings are the hardcore fans. But wanting a seat doesn’t necessarily = “money to burn” or "not that big a fan" and there’s a whole world of grey area between actually being disabled and not being able to stand in one place for three hours without your health suffering, and there’s where I fit in. So I’m stuck needing a seat where, less enthusiastically publicised, the prices have been rocketing year by year. To actually see a whole season I’ve been paying more and more every year for worse and worse seats, while in real terms yard tickets are half the price they were when the theatre opened. I don’t resent the groundlings themselves (well, I seem to know half of them) for getting a good view for a cheap price but I don’t think asking them to take a bit of the weight of rising costs and inflation is unreasonable. If the seats got a price freeze for a couple of seasons and groundling tickets went up to £7 they’d still be a bargain, and would it really damage attendance to a crippling degree?
Posted by nick730 at 23:18