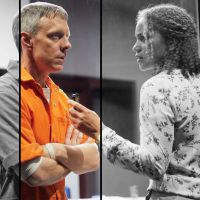 Robert Schenkkan’s dystopian Building the Wall has, perhaps unsurprisingly, been a hit in the USA, where it was one of the first plays to imagine the consequences of a Trump presidency. Set in a Texas jail cell in November 2019, Trump has been impeached, for reasons that may or may not turn out to be connected to the cell’s inhabitant: Rick (Trevor White) is awaiting sentencing for a crime that’s made him the most hated man in America, and following his lawyer’s advice he didn’t testify at his own trial, so his side of the story remains unheard. From the pile of letters asking for interviews, he’s picked out Gloria’s (Angela Griffin,) and we follow the uninterrupted 80 minutes the historian has been granted to interview him. The actual nature of his crime is the play’s big reveal so it’ll be a while before we can get to that; first we have some background to the characters, particularly Rick himself.

A Trump supporter not quite from the start but early on in the campaign, he’s personable and insists he’s not a racist, but maintains to this day that all America’s problems come down to illegal immigrants – a term he has a pretty broad definition for. 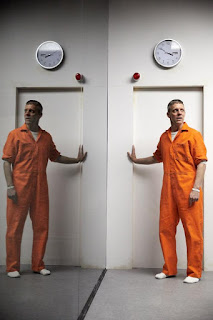 In the play’s timeline, a terrorist event in June 2018 led to the imposition of martial law in America, and it’s a short step from there to rounding up immigrants and forced deportations. Rick was the governor of a remote private prison that got used as a holding centre, and we hear how problems there quickly escalated as the number of detainees kept increasing. Building the Wall is a pretty brutal and unflinching look at where Trump’s policies lead if taken to their natural conclusion, and Jez Bond’s production nicely holds the tension in Sarah Beaton’s glassed-in set. There’s a conceit that the audience can’t hear what the pair say to each other unless Gloria’s dictaphone is switched on; it lends the story the air of being an archive we’re listening in to, as if what she’s recorded is the only surviving record of Rick’s version of the story. 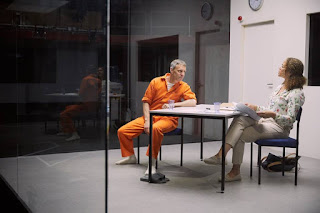 The cast build up a tense relationship (even if, among a couple of niggling things, I had to wonder about Gloria being left to her own devices for so long with someone seen as the most dangerous man in America,) and though Griffin has less to work with than White she manages to create something of a character for Gloria, who’s for the most part a sounding board for Rick. I also thought that, even though we’re only explicitly told Rick’s crime near the end, once we start to hear his story it’s clear where it’s going to end up, which perhaps takes away from its eventual impact (it was interesting to hear bigger audience gasps for some of the horrors committed along the way, than for an ultimate atrocity which by that point had become depressingly inevitable.) 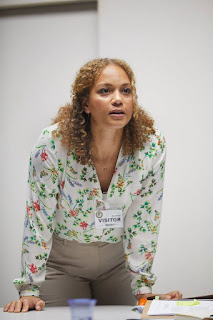 Of course that depressing inevitability is much of what the play is about, charting a speedy progress from one crisis to the next, with the powers that be passing laws and leaving others to figure out the details – and take the blame. In fact if there’s one major divergence from the historical precedent it seems to be that those in charge have got canny to avoiding responsibility and, in hindsight, Rick can see how he was manipulated into his actions without a paper trail left to put anyone but himself in the firing line. There’s plenty of details in Schenkkan’s play that don’t quite ring true, but its overall thrust of where words of hatred eventually lead sadly does.

Building the Wall by Robert Schenkkan is booking until the 2nd of June at Park Theatre 200.