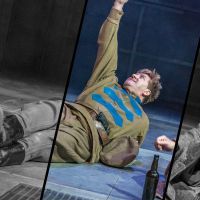 Rajiv Joseph’s Guards at the Taj took its inspiration from a false, but widely believed, legend about the building of the Taj Mahal; for Describe the Night he mixes real historical figures and events with fiction of his own invention, in a play that looks at Fake News in a context that made an art form of it: Soviet Russia. His story ranges over 90 years and could be described as the journey taken by a diary, written by journalist and novelist Isaac Babel (Ben Caplan) in 1920. Following the Russian army to Poland, he was employed to write the official dispatches, but also kept this personal journal to record his reactions and descriptions of places and events. In 2010, a plane crash near Smolensk killed the Polish president and much of his cabinet on the way to a memorial service, inspiring conspiracy theories about the Russian government’s involvement. When Feliks (Joel MacCormack) finds the wreckage, a dying woman gives him the diary.

The book’s progress over the intervening century is closely tied up with a notorious figure from the early Soviet regime, Stalin’s right-hand man and architect of the Great Purge Nikolai Yezhov (David Birrell.) 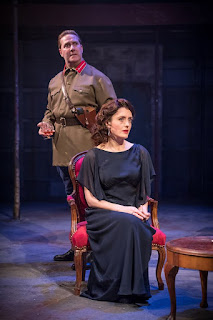 Nikolai is a soldier befriended by Isaac on the front line, whose painfully literal mind has trouble understanding the writer’s poetic take on his surroundings. By the late 1930s the two still keep in touch, and when they meet Nikolai tries to warn his friend that the Purge is coming, and that not only can he not protect him but he might be the one to take him down; but Isaac is too busy starting an affair with Nikolai’s wife Yevgenia (Rebecca O’Mara) to realise how serious the warning is. The scenes from the 1980s onwards are dominated by ambitious KGB man Vova (Steve John Shepherd,) sent to East Germany to spy on Yevgenia’s granddaughter Urzula (Siena Kelly) and falling for her instead. 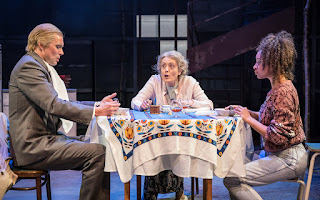 Jumping backwards and forwards in time, the story is a tangle of coincidence and contrivance, but it works because the borders between reality and fiction, and the way an insistence on literal truth can muddy things more than any lie, are the play’s whole point. It takes its title from the way a highly literal mind like Nikolai’s will find the simplest description to be a lie because it’s filtered through personal experience and opinion; but by the time he’s a dusty relic hidden in a Kremlin basement surrounded by files, Nikolai controls what the truth is – editing and redacting people’s files, what’s left being the official truth about their lives because it says so in black and white. 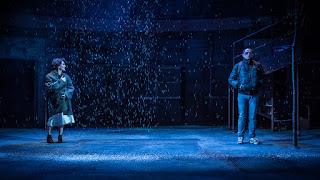 The historical Nikolai and Yevgenia both died in 1940, victims of his own Purge, but in Joseph’s version of the story this was fake news too, and they live on for many more decades behind the scenes, influencing the story that sends the journal around Europe. Joseph even teases a more literal link between what is said to be true and what becomes true in a tinge of fantasy that underscores the play: The stories Isaac makes up about leech soup end up bleeding into reality, while Yevgenia insists she can tell people’s futures (she only ever predicts more war, though.) The slight hints of the surreal in Lisa Spirling’s production help balance the play’s basis in reality (Polly Sullivan’s imposing set very much grounding things and making the sense of an oppressive state easy to buy into) with the flights of fancy the story takes in. 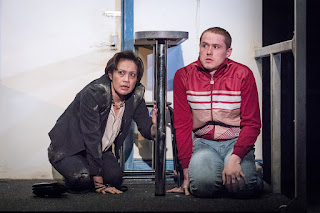 The inclusion of real people as characters turns out to include the 21st century scenes as Vova rises to power (Vova is short for Vladimir, but unlike the characters based on dead people he isn’t explicitly given a surname - you can’t be too careful.) The fate of journalist Mariya (Wendy Kweh) when the fateful diary comes into her possession makes the 2010 scenes indistinguishable at times from the 1937 ones. Describe the Night is a strange and ambitious epic about the way control of what’s deemed the truth has been a powerful tool before, and is again, and it’s a wilfully hard play to pin down. It was clear from the discussions I overheard at the intervals that a lot of the audience were finding it a frustrating watch, but with a tight production from Spirling and the cast I found it a weird ride I was happy to go along with.

Describe the Night by Rajiv Joseph is booking until the 9th of June at Hampstead Theatre.

Running time: 2 hours 40 minutes including one interval and a 5-minute pause.