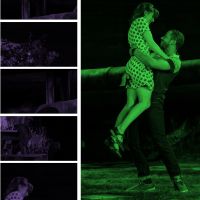 Nicholas Hytner’s Bridge Theatre launched with the announcement of its first three shows, designed to be a showcase of the three main seating configurations the auditorium could use. Of these the third, Barney Norris’ Nightfall, stood out as an unusual choice for a new, large-scale venue: He’s been building a name for himself Off-West End but it seems a big ask for Norris to fill a 900-seat theatre for a month, especially without a headline-grabbing cast. There’s also the fact that the playwright’s previous work has all been very intimate, and I wondered how he’d handle something more epic. As it turns out that’s not really what he’s aiming for anyway: Rae Smith’s set, putting the yard of a farmhouse on the thrust stage, could happily stage a naturalistic Uncle Vanya, but unlike Chekhov’s multiple story strands there’s only four characters to follow here.

Jenny’s (Claire Skinner) husband died of cancer in the last year, and she’s relying on son Ryan (Sion Daniel Young) to keep up the family legacy by running the failing farm. Her daughter Lou (Ophelia Lovibond,) who’d previously moved out, moved back in to support her mother during her father’s illness, and is now feeling trapped there. 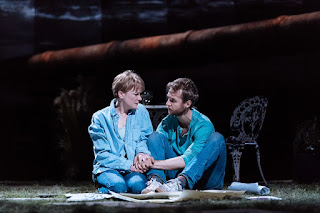 Smith’s set is dominated by an oil pipe that runs through the farm, the rent on it providing a little added income, and when the play opens Ryan has found another potential financial benefit: His best friend Pete (Ukweli Roach) is helping him siphon petrol off it to use in the farm machinery, and possibly to sell on. Pete has just come out of prison after serving a year for GBH, a conviction it sounds like Ryan himself barely escaped sharing. For Lou Pete’s return is a more complicated matter – she used to go out with him before he went to prison, and she doesn’t know if she wants to try and start again where they left off. Jenny has very strong opinions on the matter, and is determined to put a spanner in the works of any reunion. 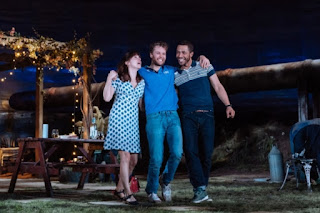 Nightfall is the kind of play that gets described as a “slow burn,” and while I never really found it dull it never disproved my suspicion that Norris’ low-key style would struggle to fill a venue this large – there’s a definite feeling that this would have been more effective in a more intimate space. The Chekhov connection that Smith’s set suggests is no accident, and Laurie Sansom’s production definitely plays up to the influence in the way the characters are drawn. As it turns out, though, another initial thought proved accurate, in that there’s a reason Chekhov plays tend to have a lot more than four characters in them – when it plays out so understatedly it’s hard to sustain a single story for an entire play. 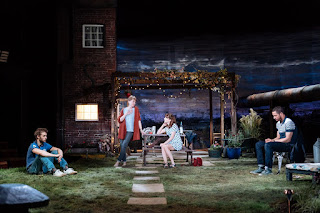 As with many of the rural plays at the moment there’s a lot of Brexit metaphor – notably in Jenny’s holding on to a romanticised past when her husband was alive, tying her children into a financially disastrous future to try and recreate something that never existed, and demonising the black outsider who in reality seems to have been nothing but a positive influence on the family. This, together with the nods to Chekhov, means Nightfall invited inevitable comparisons to Albion; despite, arguably, treating both elements more subtly than Mike Bartlett’s play, it’s actually less effective at making you care about the characters, possibly because beyond Pete they’re hard to like. 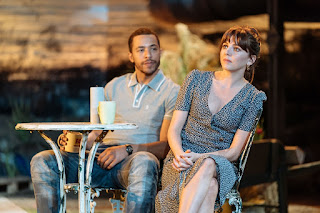 Although the play itself would probably feel less exposed and work better in a smaller theatre, Sansom’s production and his cast give it a decent outing here, and even if it ultimately doesn’t feel that substantial it’s for the most part quietly watchable, and not just a first act that mostly requires Young and Roach to wander around in their pants (weirdly, this seems to have inspired the theatre to post a warning that as well as strong language and smoking, the play contains “semi male nudity.” I’m still no clearer on which of the cast is “semi male” than I am on why this scene isn’t represented in the production photos, don’t they want to use every promotional tool in their arsenal?) With new plays by Alan Bennett and Martin McDonagh still to come in the season, Hytner obviously thought the guaranteed income made taking the financial hit of giving a lesser-known playwright a platform worth it, and hopefully it’s something we’ll continue to see here, but in this instance playwright and platform haven’t been perfectly matched.

Nightfall by Barney Norris is booking until the 26th of May at the Bridge Theatre.