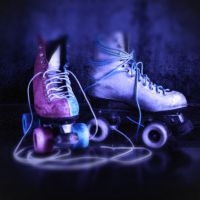 Does Southwark Playhouse have an ultimate goal of staging Starlight Express some day? They seem to have cornered the market in shows involving roller-skates (who knew that was even a market to be cornered?) and after Xanadu and punkplay comes Kander and Ebb’s 1984 musical The Rink. It takes a while for anyone to actually get their skates on though, as the rink in question is one that’s seen better days and has fallen into disrepair. Anna (Caroline O’Connor) inherited it from her father-in-law, and for many years it was a main attraction of the boardwalk in an East Coast town. With the economy closing most of the businesses on the boardwalk, Anna has sold off the rink to developers who plan to knock it down. The demolition crew are already there helping her clear everything out, but so is someone she didn’t expect: Her daughter Angel (Gemma Sutton) is co-owner of the rink, and Anna forged her signature to make the sale.

Angel hasn’t set foot in the place in seven years, but now she's back she insists on keeping it in the family and letting it stand, holding on to her memories of growing up there. 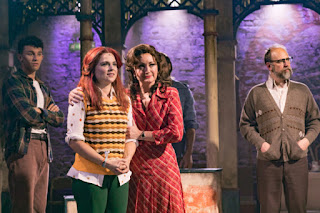 The musical, with a book by Terrence McNally, is essentially about the mother and daughter resurrecting their fractious relationship, the latter enjoying a rosy view of the past, the former bringing her crashing back down to earth with the truth, particularly about her father. Though all the action takes place in a couple of hours in the dilapidated roller rink, we get a lot of flashbacks in which the chorus of workmen take on the roles of the men in their lives, particularly Anna's husband Dino (Stewart Clarke,) a Korean war vet who came back an abusive alcoholic, and who eventually left his family - Angel, being told he'd died, held on to the image of him as the perfect father. 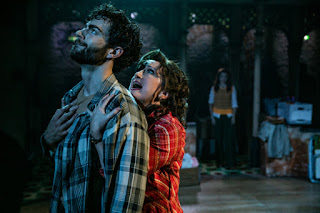 Although in terms of numbers this is a predominantly male cast, the focus is very much on the women. There are moments when this relationship is uncomfortably both of its time, and the product of three male writers - Anna's parenting almost exclusively consists of telling Angel she's fat, and in a flashback to her high school prom, held at the rink, she finds out which boy (Elander Moore) Angel likes so she can more or less pimp her daughter out to him. But the leading ladies largely overcome their problematic characters: O'Connor comes to the fringe straight from Broadway (possibly because she was told she'd be getting off with Stewart Clarke every night,) and gives Anna a flirtatious sense of mischief that stops her from coming off too monstrous. Sutton's performance, meanwhile, is sometimes good enough to distract you from how bad her wig is - I don't know what animal that was on her head, but it had been dead a long time. Both women get the chance to seriously belt through some big Kander and Ebb numbers. 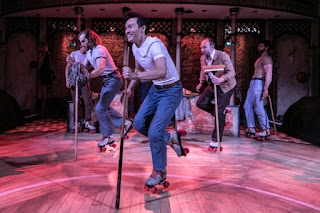 These don't include any classics, but the surprisingly low-key Act I closer "Coloured Lights" bears the hallmarks of the Cabaret composers, and the title song, in which the men finally get their actual skates on, is catchy. Although it has plenty of lively interludes this is at heart rather a melancholy show about leaving the past behind, and Adam Lenson's production plays it pretty straight - although it doesn't reference a point quite as specific and weird as Chess does, I still had a couple of those moments of taking a mental step back and thinking a derelict roller rink was a very odd subject to write a Broadway musical about. But Bec Chippendale's set gorgeously brings this faded grandeur to life, and if the show doesn't emerge as a classic its nostalgia draws you in for a couple of hours.

PS: I've seen some tight T-shirts in my time but Michael Lin must have actually been vacuum-sealed into his.

The Rink by Terrence McNally, John Kander and Fred Ebb is booking until the 23rd of June at Southwark Playhouse's Large Theatre.