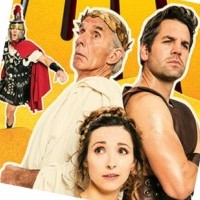 With West End long-runner The 39 Steps finally shutting up shop this year, it could be that the people behind it are hoping to replace it with another iconic film turned into a frantic four-actor comedy. Whether it'll be making a trip to the Criterion is anyone's guess, but for the time being Ben Hur is providing a lot of laughs at the Tricycle, with surely the silliest Christmas show outside of panto. This time Patrick Barlow's script has a touch of The Play That Goes Wrong about it, as we meet Daniel Veil (John Hopkins,) the self-styled theatrical impresario who's written, directed and produced his stage adaptation of General Lewis "Lew" Wallace's biblical novel, and will of course also be taking on the title role. Alix Dunmore, Richard Durden and Ben Jones join him to play everyone else, and to try and keep the constant set and costume changes running smoothly.

Opening with a Nativity scene, the action jumps forward 25 years to Roman-occupied Jerusalem, and Judah Ben Hur's foster brother Messala (Jones) has been put in charge of the city. 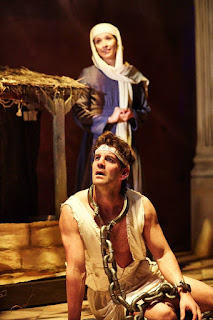 With his foster family refusing to condone him subjugating their people, Messala takes revenge by imprisoning Ben Hur's sister (Dunmore,) beloved (Dunmore again) and mother, aka "Hur Indoors" (Durden,) while sending Judah himself to be a galley slave. When he is finally freed and made a Roman citizen, he vows revenge, despite several meetings with Jesus (Jones,) who tries to persuade him to forgive. 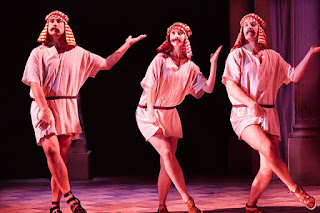 They do pretty much try to stick to the story, and their low-budget attempts to create an epic are where most of the laughs come from, as well as from the script's confused attempts at a classical style (although as in all his writing, Barlow is way too enamoured with the joke of characters tripping over convoluted dialogue.) More lines hit than miss though: There's a great gag about Jesus building a sideboard that Ian and I were still chuckling about at the interval; while the film's notorious homoeroticism gets referenced in a scene in a too-small ship's cabin, sneaking by probably the show's dirtiest joke (involving a porthole) in the process. 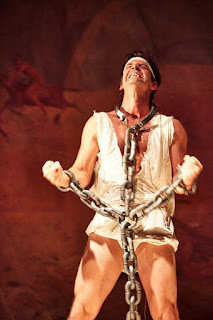 The second act introduces an extra element as the characters' private lives start to interfere with the play-within-a-play, keeping things fresh and stopping the show from outstaying its welcome. Hopkins has the knack of both perfectly embodying the square-jawed hero who's clearly spent some time down the "gumnasium," while at the same time subverting his pomposity. There's nothing sophisticated about Tim Carroll's production (except for the cleverness behind how ridiculous some of Michael Taylor's designs are.) But if a couple of hours of old-fashioned silliness sounds like your idea of a good evening, you'll find it here.

Ben Hur by Patrick Barlow, based on the novel by General Lew Wallace, is booking until the 9th of January at the Tricycle Theatre.