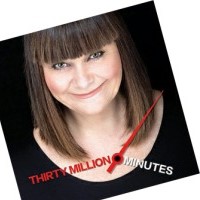 Dawn French's monologue is advertised as being neither standup comedy nor theatre but somewhere in between; essentially Thirty Million Minutes is a personal memoir that, instead of publishing, French has chosen to perform. The thirty million minutes of the title correspond roughly to her current age of 58, and the show is loosely held together by a theme of her learning how to be the things life demands of her: First a daughter and sister, then wife and mother, and later single again - before eventually and unexpectedly becoming a wife and stepmother again. The majority of her reminiscences come from childhood, growing up in an RAF family and therefore often moving around, calling places as diverse as Cyprus and Plymouth home. Discussion of her adult life also focuses on the personal and doesn't touch at all on her comedy career, although there's a few audience-pleasing offhand references to Jennifer Saunders, and photos of many of her comic contemporaries.

French is something of a national treasure with a warm public persona, which is why I wanted to catch her show; she establishes her self-deprecating, confessional style at the the opening when she admits she's doing this show because she suspects this is a brief period of lucidity between menopause and dementia. 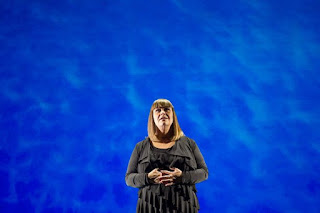 As well as a lot of inevitably funny moments, including a few stories over-sharing her and her family's medical issues, there's also more heartfelt and emotional moments. Most effective is the story of her father's suicide when she was 19, the only time French stops talking and stands back as her recorded voice takes up the narrative. 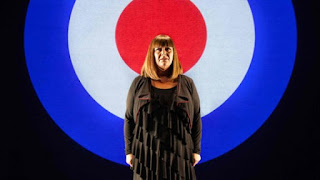 On the downside, the show is very rambling and unstructured, and I wish director Michael Grandage had helped tighten it up a bit more - the end is a particularly haphazard collection of thoughts on her two marriages before the show comes to an abrupt conclusion, and with it overrunning by nearly half an hour tonight it felt increasingly like it could have done with a couple more rewrites. Nice to spend a couple of hours with a much-loved personality, but while tonight's performance clearly connected with the audience, the laid-back and rambling narrative doesn't match the glitzy presentation and Lez Brotherston's slick design.

Thirty Million Minutes by Dawn French is booking until the 5th of December at the Vaudeville Theatre.