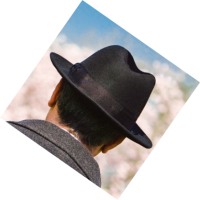 According to the Finborough's publicity, when Flowering Cherry premiered in 1957 it was called a British Death of a Salesman, and there are certainly parallels to be drawn. Robert Bolt's Willy Loman figure is Jim Cherry (Liam McKenna,) at one time a travelling insurance salesman who, despite his dislike for the job and actual undisguised contempt for the customers, was good enough at it to be promoted to management. This office job hasn't been as much of a success though, and between frustration and fear of being sacked, he starts to claim he's resigned. Always a compulsive liar and a fantasist, he retreats into a long-held dream of selling up and returning to his native Somerset to start an apple orchard. It's left to his long-suffering wife Bel (Catherine Kanter) and their children to try and find the truth in what he tells them, and figure out what kind of future they actually have.

Despite this plot summary there's a lot of comic scenes in Flowering Cherry, a play that opens with a light touch as Jim brings home a doddering colleague, Benjamin Whitrow (also directing) providing a lot of fun as he listens in total credulity to Jim's latest tall tale of standing up to the boss. 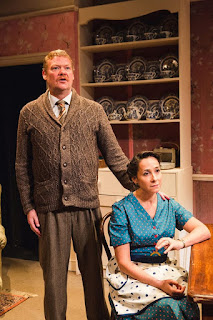 And one thing I liked about the play was the way this comic façade reveals something darker underneath it. Unhappy with his city life and sedentary job, Jim espouses a fantastical rural alternative, telling tales of growing up on the farm and grumbling at his poetry-reading son Tom (James Musgrave) for not being as physically strong as the farmhands he remembers. The alpha-male act extends to downing several pints of scrumpy (secretly laced with gin) every night, and inappropriate flirting with Carol (Phoebe Sparrow,) a friend his daughter brings home. Things unravel as it becomes apparent that Jim's orchard fantasy extends to making enquiries about buying hundreds of apple trees, with Bowman (Ashley Cook,) a farm goods salesman, even turning up at the house convinced he's got a potential big customer. 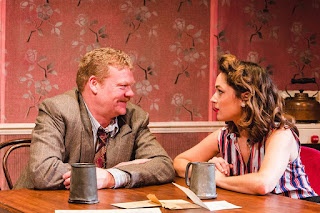 There's quite a lot going on, including Jim stealing gin money from his wife and blaming it on Tom, while his daughter Judy (Hannah Morrish) seems to have inherited some of his inability to tell the truth. The play's most powerful moments come when Jim is actually offered the possibility of making his rural dream come true, and can't handle it. I found Flowering Cherry strong, but quite limited in its ambitions - the comparisons with Death of a Salesman only work up to a point, and the fact that Jim is little more than a blustering, bullying fool his family should have had enough of years ago, means he never seems a tragically flawed character - just flawed and a bit tragic. Instead it's Kanter's powerful performance of the stiff-upper-lipped 1950s housewife, caught between loyalty to her lying husband and the prospect of a new romance with Bowman, that really stands out.

Flowering Cherry by Robert Bolt is booking until the 20th of December at the Finborough Theatre.