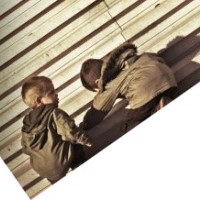 This is certainly the year not just for Greek Tragedy, but for plays that take some of the mythology's most famous stories and rewrite them in a new way. The Gate's Medea opens just as the Almeida's nears the end of its run, and while that interpretation - one I liked less the more I thought about it - sidelined the story's most notorious victims, to the point of not caring whether they were actually dead or not by the end, this one puts them centre stage. Writer Kate Mulvany and writer-director Anne-Louise Sarks tell the story from the bedroom shared by serious pre-teen Leon (Bili Keogh, alternating with Keir Edkins-O'Brien) and his hyper little brother Jasper (Samuel Menhinick, alternating with Bobby Smallridge.) They play, argue and discuss - tentatively - the conversation going on downstairs between their parents, which they are vaguely aware is about the future of their marriage. They're to stay in their room while their parents talk; the ominous first sound we hear is them being locked in by their mother.

Medea herself (Emma Beattie) is only glimpsed a couple of times as she enters the room with little, vague updates on the story going on in the wider world as well as, of course, to deliver the play's crushing ending. Mulvany and Sarks' approach to the story puts the audience at the children's viewpoint, being drip-fed information that doesn't always make sense to them, and as such it must be a completely different experience - though I imagine an equally powerful one - to someone who comes into the performance knowing nothing of the story, than it is when you're familiar with it and can picture it unfolding behind the locked door. 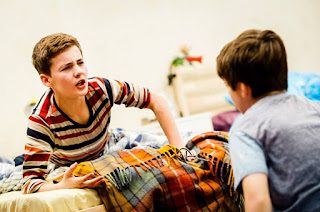 And the story itself is actually very faithful to the version Euripides tells: Medea fled her home with Jason, but now he's met a younger, richer woman (referred to only as Dad's "Friend" with sarcastic air-quotes by Leon) and he's going to live with her, and take the boys with him. Medea sends her rival a deadly wedding gift, pretending it's from the children, before returning for a final twist of the (in this case metaphorical) knife. Though Amy Jane Cook's design and many of the references are modern, the script is very clever at leaving it up to the audience whether this is the original fantasy story or the domestic setup it looks like: Leon tells Jasper the story of how their parents met for the umpteenth time, and we can choose whether he's the mythological Jason stealing the Golden Fleece, or an exaggerated hero version of two modern children's father. Dad's "Friend" is referred to as a princess, and again whether literally or sarcastically is open to interpretation. Also ominous is the way the children's play always comes back to death - they start by competing over who can do the most over-the-top movie death (the play's ending will be contrastingly understated) and their toys are all guns, bows and arrows and swords. 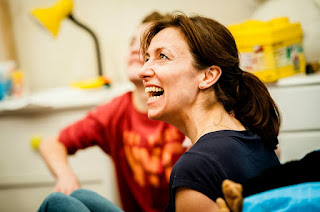 In recent years theatre companies have shown increasing confidence in child actors, and with Beattie only appearing for a few minutes in the show's hour-long run, the majority rests on Menhinick and Keogh's shoulders, the former the scene-stealing firecracker, the older boy a bit more thoughtful and serious, understanding much more of the situation but of course not quite how bleak their situation is. The boys' performances are naturalistic, charming and strikingly confident, and of course it's the banality of the situation that the writers are bringing out here - this is an everyday scene with a creeping menace behind it that only the audience is aware of. The older-than-his-years Leon is just musing on the fact that the universe is huge and they're helpless in it, when their mother arrives with "special" drinks for the boys. 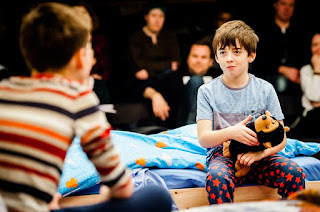 My only real criticism of the production is that, for me at least, both the writing and the performances are so clever that I was very impressed by that without ultimately feeling an emotional kick. In fact an attempt to use They Mights Be Giants' "Birdhouse in Your Soul" in a similar way to the Oresteia's "God Only Knows" actually had more of a distancing effect for me as I could see the way it was intended to work but didn't feel it. Judging by some of the sobbing around me by the end though, the play's gradual build to tragedy - which sees Medea get the kids to tidy their room and change into their best clothes to present all the more devastating a final tableau - did work on many in the audience. And even if I held my emotional distance more than I expected to, I can't deny a fascinating take on the classic story, and a couple of very promising, fearless young actors at the heart of it.

Medea by Kate Mulvany and Anne-Louise Sarks after Euripides is booking until the 5th of December at the Gate Theatre.