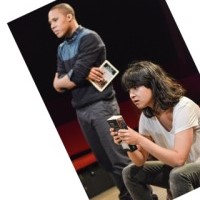 A shaky start could resolve itself in great things or a complete nosedive; true of many people's first year at university, and of Will Mortimer's debut play about a mature student, A Further Education. At an unnamed (more on this later) university, new tutor Chris (Oliver Hembrough) has three first year students in his tutorial group. Straight out of school are Lydia (Isabella Laughland) and Joshua (Makir Ahmed,) while Charlotte (Stella Gonet) is a local, much older but sharper than any of them when it comes to dissecting the classics. Her grades are high and her fellow-students quickly accept her in their social circle as well, and she even ends up becoming friendly with the strident but scatty new Vice-Chancellor Rachel (Issy van Randwyck.) There's more than just her age and the breadth of her knowledge that sets Charlotte apart from the rest of the students though, and Joshua and Lydia soon stumble upon a secret about her.

In a climate where further education is increasingly seen only in terms of its financial value, Mortimer's play is something of an ode to the acquisition of knowledge for its own sake. 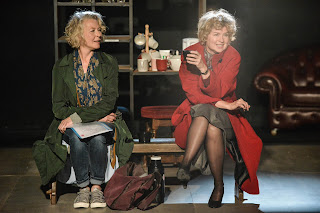 An admirable sentiment and somewhere underneath it all you can tell it's heartfelt, but there's a lot of problems with the script that stopped me from just sitting back and taking it in. Quite quickly the dialogue starts to feel unlike anything a real person would ever say, both students and educators spending a lot of time waxing lyrical about education in the abstract. The insistence on not naming the university has Mortimer tied round in knots - a lot of "we have come to this place but you have always lived in this place" and "she lives in a suburb of this city that we are currently attending university in." At least this vagueness meant I could simply assume this was Oxbridge, and ignore things that bore no resemblance to my own time at university (tutorials with only three students, the Vice-Chancellor having regular, or indeed any contact with freshers etc.) 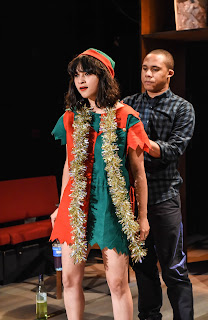 Caitlin McLeod's production is slick and has, for the most part, a strong and entertaining cast, which helps gloss over some of these issues and the fact that the first act is a bit too long - we have to sit through too much actual literary criticism - with too little story. A twist before the interval suggests a promising and much-needed plot development, but the way it develops in the second act is so implausible it might as well be high fantasy. At this point an imperfect but promising play really started to flounder and, for me, never recovered. 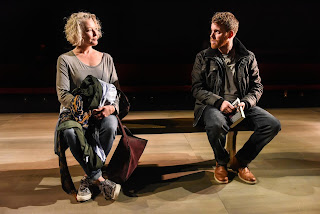 Laughland is always a fiery and entertaining presence (and here gets a little in-joke about Daniel Radcliffe being her character's first crush,) Ahmed a likeable newcomer, and the role of Rachel could have been written for van Randwyck (and, Mortimer having been literary manager at her husband's theatre for the last five years, may well have been) but it was only in retrospect we figured out our problems with Charlotte came from Gonet being woefully miscast. The warm person described, whom the women are all keen to spill their secrets to and the men strangely attracted to, bears no resemblance to the severe governess figure on stage. At the interval Ian and I were discussing how Charlotte just isn't likeable; after the show it clicked that she should have been more of an everywoman, quiet because she's restrained rather than aloof, a seemingly unremarkable person discovering a surprising talent. Instead what we get is every inch the frosty career academic. While the awkwardness of much of the script means A Further Education was always going to be problematic, the fact that script and production seem to be describing a completely different central figure explains much about why I ended up caring less for it the more it went on.

A Further Education by Will Mortimer is booking until the 28th of November at Hampstead Theatre Downstairs (returns only.)