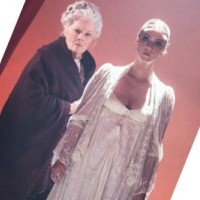 The latest director to launch his own West End residency is Kenneth Branagh, and he promises to stick around until the end and not get distracted by a shiny thing this time. For the opener SirKenBran co-directs with Rob Ashford and stars as Leontes in Shakespeare's The Winter's Tale. Leontes is king of Sicilia, and lifelong best friends with the king of Bohemia, Polixenes (Hadley Fraser.) Until, that is, for no reason at all, he becomes convinced that Polixenes is having an affair with his wife Herminone (Miranda Raison) and that the baby the queen is pregnant with isn't his. By the time the oracle at Delphi confirms Hermione's innocence it's too late: His public accusation and humiliation of her has brought about deaths and divine retribution, and Leontes' misery can only be ended 16 years later, when his lost baby daughter Perdita (Pirate Jessie Buckley) is found in Bohemia.

I often find that Hermione's faithful retainer Paulina, the only person to consistently stand up to Leontes' tyranny, is an underrated role that provides a lot of the heart this chilly tale is otherwise missing. So it's nice to see her acknowledged as such here by being the star casting coup, with Judi Dench returning to Shakespeare. And after a couple of plays even she couldn't save, Dench of course lives up to expectations: As well as the play's conscience she becomes its narrator - the show now opens with her talking to Mamillius (Pierre Atri or Rudi Goodman) in the scene that gives the play its title, and post-interval Paulina also becomes Time, catching us up on the 16-year gap in the story. The Garrick is a terrible theatre even by West End standards if you're in anything other than top-price seats - the rake is so flat I could see people's heads butting onto the stage eight rows ahead, and the seating's not offset so I was constantly having to sway from side to side to see past the woman in front of me. But even in quick glimpses Dench delivers. It's just as well because nothing else about the production does. Branagh and Ashford have assembled really good actors like Raison, Michael Pennington as Antigonus and John Shrapnel as Camillo, as well as other actors like Tom Bateman and Adam Garcia, who as a dramatic actor makes a great dancer. But no amount of precise and pretty verse-speaking can disguise an underpowered, oddly static production. Christopher Oram's sets are grand and stately, with a Christmas tree in the Sicilian scenes but no other remotely Christmassy reference at any point, but the action on them is a bit "will this do?" At least this pays off when the play's notorious bear attack is just footage of a real bear projected onto a sheet - if past productions have taught us anything it's that the less effort put into the bear, the less embarrassment for all involved (cf the RSC's CGI tsunami bear.) 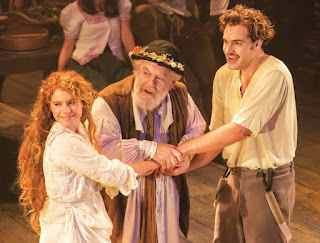 Admittedly The Winter's Tale isn't a play I like much, and the Sicilian scenes are often problematic, but things at least tend to pick up at the Bohemian festival. Sadly these may be the worst Bohemian scenes I've ever seen, the play's problematic tonal shift being less of a problem, I guess, when it doesn't really happen and things stay vaguely mournful throughout. Bateman and Buckley are a Florizel and Perdita who barely register1, and the comic setpiece of Autolycus (John Dagleish) robbing the Clown (Jack Colgrave Hirst) is done perfunctorily2. At least the time doesn't drag - the three hours tick by speedily enough, but uninspiringly.

The Winter's Tale by William Shakespeare is booking in repertory until the 16th of January at the Garrick Theatre.

1I do wonder if I'm so predisposed to Bateman being a nonentity that I've prejudiced myself against ever liking him on stage, but Phill had no opinion of him going in, and said if he hadn't been taller than the rest of the cast he'd have had a lot of trouble remembering he was there.

2Obviously nothing can live up to Karl Davies being stripped to a thong, but that doesn't mean you shouldn't make the effort. Colgrave Hirst did attempt to take his shirt off at one point, but failed. I have no idea if that was a gag or if he genuinely couldn't get his shirt over his head and gave up.
Posted by nick730 at 23:32