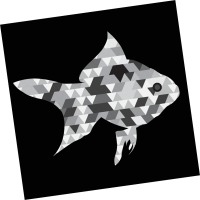 Jess (Sophie Steer) turns up on the doorstep of a woman too stunned to speak, soaked by the rain and carrying a goldfish in a bowl. Simon Longman's Sparks is the classic theatrical staple of family members suddenly reunited after a long time apart - in this case over twelve years, and as the women only appear to be in their early twenties, it's obvious they were separated when they were very young. The woman is Jess' sister Sarah (Sally Hodgkiss,) who maintains a shocked silence as the girl who walked out one day and hasn't been heard from since returns as a motor-mouthed woman with a backpack full of booze. The latter is part of what will eventually help Sarah loosen up and discuss the abandonment she's felt since her last remaining relative left her, and the lonely life she's led since.

The full background of the sisters' story does eventually get revealed, but it never actually feels that important to know all the details. Clive Judd's production focuses instead on the dynamic of the siblings who reacted to tragedy in opposite ways - one by running away and making a noise, the other by barely leaving the flat except for work and retreating into herself. 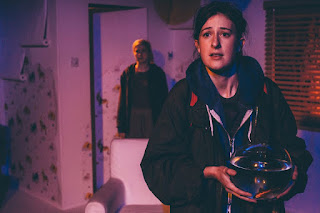 The casting I saw: Sophie Steer (foreground) as Jess, Sally Hodgkiss as Sarah

Despite the obvious damage underneath it, Jess' excitable chatter has a lot of funny lines, with some moving moments cropping up unexpectedly - the description of an elderly couple taking in the homeless Jess is surprisingly effectively heartbreaking. Steer has the showier role (although the actors alternate the parts from one performance to the next) but there were plenty of times when instead of watching her I was drawn to Hodgkiss' silent withdrawal into herself instead. 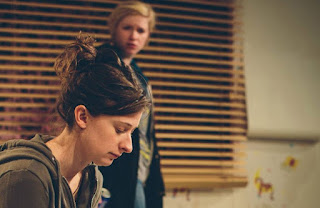 The alternate casting: Hodgkiss as Jess, Steer as Sarah

I also liked Jemima Robinson's set design of a flat with Winnie-the-Pooh wallpaper, halfway through being papered over by a much blander, grown-up design, a little visual clue to the gap between the times the sisters see each other. But while I know why the Old Red Lion sometimes has to add an interval to a play short enough to do without it, the break in momentum can be detrimental, and so it is here: A sudden move into a much darker place in the second act feels too abrupt, in a way that it probably wouldn't if it had been carried along by the pace of the first. It stops the piece from being entirely satisfying, but there's still a lot to admire in a sensitively-written script and interesting performances, most likely all the stronger for the actors having to know both roles.

Sparks by Simon Longman is booking until the 5th of December at the Old Red Lion Theatre.