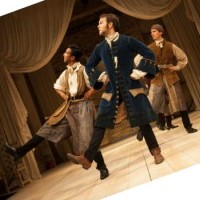 In the prologue to William Congreve's Love for Love Angelica (Justine Mitchell) promises all sorts of fun over the next few hours on the stage then ends by saying that, for the more discerning audience member, they'll even throw in a plot. Well there's lots of fun moments on the Swan's stage but calling what happens an actual plot might be stretching the term to breaking point. We're in Restoration Comedy territory, in genre if not historically, as the play premiered in Queen Anne's time and - in a nod to Helen Edmundson's play that will be in rep later in the season - Queen Anne herself is in the audience: In one of many fourth wall-breaking touches, an audience member gets to wear the crown (this afternoon's Queen was clearly thrilled to be chosen as she kept it on throughout.)

But regardless of who was monarch at the time, the format demands a dissolute aristocrat, and Valentine Legend (Tom Turner) is deeply in debt. His father Sir Sampson (Nicholas le Prevost) has a drastic solution for his least favourite son: He can have £4000 now, in return for signing his inheritance away to younger brother Ben, who's currently at sea trying to make his fortune. Meanwhile at the home of paranoid astrologer Foresight (Michael Thomas) live a number of eligible young ladies, some with fortunes of their own, so marrying Angelica might solve Valentine's immediate money woes without him having to disinherit himself. 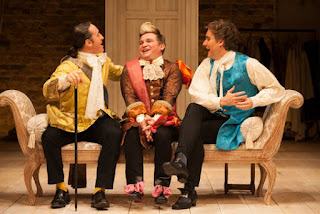 Instead of the usual brief synopsis, the programme lists the play's plot act by act, which is probably the only way to do it since it feels more like a loosely connected sketch show than a story that builds as it goes on. The second act is all intrigue between the women at Foresight's house, by the fourth we're in a version of Volpone with Valentine faking madness with help from his servant Jeremy (Carl Prekopp) and friend Scandal (Robert Cavanah.) 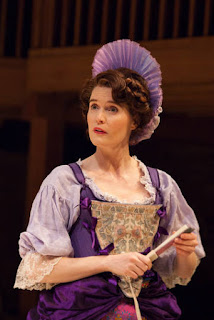 Director Selina Cadell approaches this messy plotting by recreating something of the chaotic relationship between actors and audience that might have existed when this was first staged, Tom Piper's design stripping everything back to put the mechanics out in the open. Some of the best moments come from this meta staging as a sort of play-within-a-play, the actors not always remembering where they're supposed to be, Jonathan Broadbent's Tattle generally forgetting he's meant to walk through the prop door, and a minor servant role suddenly becoming centre stage when the interval overruns and Ragevan Vasan has to keep the audience entertained with a dance routine. 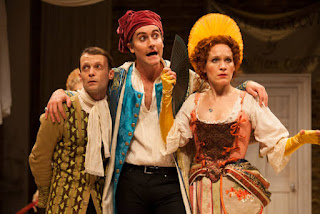 It does help paper over some of the plot problems to draw attention to them; the crucial character of Ben (Daniel Easton) doesn't appear until halfway through (then dominates the third act before largely disappearing again,) and the production makes fun of the many times his character's name has to be dropped into exposition until he finally turns up. 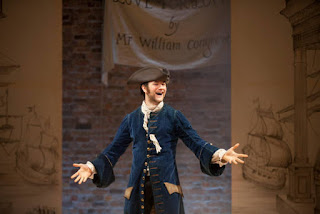 The conceit works but could have done with being committed to a bit more, the moments when we're stuck with Congreve's tangled plotting without a nod and wink are the weakest, and the audience interaction could have been a bit more inventive - giving a prop to the front row to look after is only funny so many times, but it remains Cadell's go-to gag throughout. The performances are generally strong (always good value, Jenny Rainsford is underused here as the dippy Miss Prue,) but a staging that could have saved a problematic script doesn't really take the irreverence far enough to do the business.

Love for Love by William Congreve is booking in repertory until the 22nd of January at the Swan Theatre, Stratford-upon-Avon.