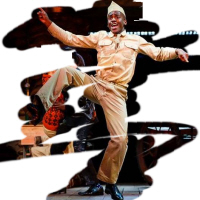 Although officially the new Globe regime won't see each cast double up over two plays, there's a lot of cast crossover between Emma Rice's A Midsummer Night's Dream and the family show she's brought with her from her previous company, Kneehigh, 946. Based on the novel The Amazing Story of Adolphus Tips by War Horse author Michael Morpurgo, it's another in the writer's peculiar niche of children's stories about real war. War Cat 946 moves us from the First World War to the Second, and a coastal village in Devon where 12-year-old Lily (Katy Owen) argued with her father before he went off to join the war. Convincing herself she's not worried about his return, she puts all her concern into her cat Tips (puppeteered by Nandi Bhebhe,) who has a tendency to run away. The farming community gets further shaken up by the arrival of evacuees from London, including Lily's new friend Barry (Adam Sopp.)

But an even more dramatic arrival comes when American soldiers set up camp and commandeer the village for a secret mission, and Lily develops a crush on Adi (Ncuti Gatwa,) fascinated by the first black man she's ever met. 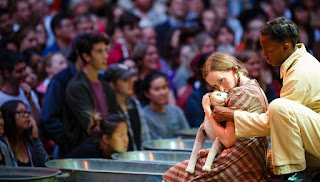 Morpurgo's story comes from the real-life Exercise Tiger, in which US troops practised for the D-Day landings on Slapton Sands in Devon, an exercise which went badly wrong when a miscommunication meant the American boats were vulnerable to a genuine attack by German E-boats, and hundreds of casualties ensued. In the middle of all this and with the threat of death in Normandy hanging over them, Adi and his friend Harry (Bhebhe) promise to search for the missing cat among the abandoned houses. 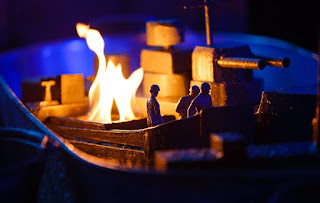 The story is told with musical accompaniment, with Adebayo Bolaji as "Blues Man" acting as a sort of emcee/narrator/lead singer, conducting a two-strong band that is bulked up over the course of the show by the cast on various instruments. The jazzy song arrangements are a highlight of the show, although the almost-constant score can get grating at times - something even the characters occasionally acknowledge, getting them to pipe down for the serious bits. They're talented actor-musicians, although Sopp's spoon-playing isn't quite as accomplished as some of the incomprehensibly many other examples we've seen this year. 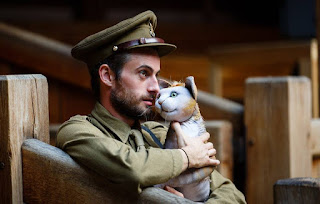 Both Morpurgo and Rice are creatives I don't love as much as everyone else seems to, but they do seem to be a good match as they offset each other's extremes: Kneehigh's brand of whimsy is one they like to shoot directly into the audience's face like the Homer Simpson Makeup Gun permanently set to "whore," but they can't get too carried away with the sort of writer who'll open his children's story with Lily's father drowning Tips' kittens, and names the stage adaptation after the overall death toll. At the same time there's room for creative use of props and set (Lez Brotherston's design puts propellers on the Globe stage's columns,) and good, sometimes bizarre comic turns like Chris Jared as a flamboyant vicar sliding down a fireman's pole* or Ewan Wardrop in drag as Barry's flirtatious mother. The story's a bit too fragmented, and the length was clearly a bit too much for some of the kids sitting near us, but overall this strikes the right note of presenting a serious - and surprisingly little-known - story from history in a light-hearted context with charm.