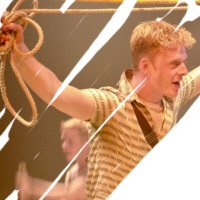 Not actually about a naked barbecue, The Burnt Part Boys is an American musical set in a West Virginia coal mining community in 1962. Ten years earlier a cave-in caused the death of several miners whose bodies were never recovered; the company promised that the specific area where it happened - now known as the Burnt Part - would stay closed as a tribute, but they're now going back on their word. Jake (Tintin Chris Jenkins,) whose father was one of the dead, has followed him into the job and is now among the first who'll be sent down the reopened tunnels, but when his 14-year-old brother Pete (Joseph Peacock) finds out about it he sees it as a desecration of their father's grave. Bringing along his best friend Dusty (Ryan Heenan) he steals some dynamite and tries to break into the Burnt Part.

Along the way they're joined by their tomboyish classmate Frances (Grace Osborn) in their plan to blow up the mine and bury their fathers once and for all; but Jake and his friend Chet (David Leopold) are on their trail. 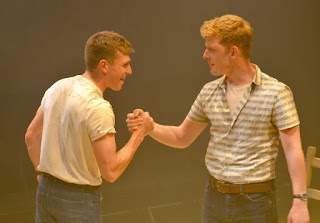 The Park Theatre has had a mixed first couple of years of existence, especially in this studio space where a few highlights have been interspersed with amateurish efforts, but in both casting and production director Matthew Iliffe has put together a show that feels on a par with the classier homes of fringe musicals like the Finborough or Southwark Playhouse. There's a bit more dry ice than strictly necessary (I'm generally in favour of actually being able to catch a glimpse of the cast now and then) but Rachel Wingate's in-the-round design sits under a ceiling of tangled ropes that suggest an atmospheric setting of neglect and danger. 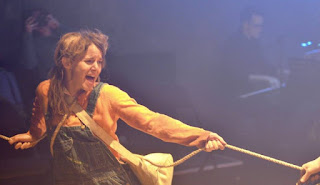 Jenkins has a strong voice albeit with a bit of a thankless character - his characterisation doesn't get much beyond "angry" - with Leopold strong support as a lunkish best friend. But the real discoveries here are the three younger actors who actually have the majority of the stage time in a coming-of-age journey over disused rail tracks that sometimes felt like I was watching Stand By Me: The Musical. Peacock is likeably determined as Pete, while Heenan's Dusty has a hint of campness that suggests he's more fond of his friend than he lets on (or maybe I'm extrapolating from the fact that Dusty Rivers sounds like a drag name.) He also plays a saw, giving 2016 a bit of a twist by making music with a household item that isn't a spoon. And Osborn, as the only female character in the show, is a refreshing addition when the story threatens to stagnate. All three have good voices and stage presence. 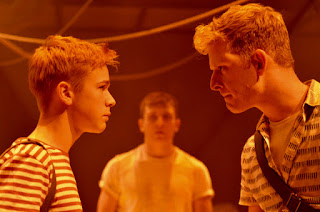 I can't say I came out humming the songs but I was definitely tapping my foot along to many of them, which is usually as good as I get with a new musical - Chris Miller's music and Nathan Tysen's lyrics have the edge over Mariana Elder's book, the action sometimes flagging when it goes too long without a song. Tysen's lyrics occasionally try to be too clever for their own good, and as the show comes with a chorus of Dead Miners, the in-the-round staging does mean that when the whole cast is onstage blocking becomes an issue. For the most part The Burnt Part Boys succeeds though, as an often sweet show that doesn't tip over into saccharine, and in making a story that doesn't seem an obvious fit for a musical work.

The Burnt Part Boys by Mariana Elder, Chris Miller and Nathan Tysen is booking until the 3rd of September at Park Theatre 90.