Theatre review: The Past is a Tattooed Sailor 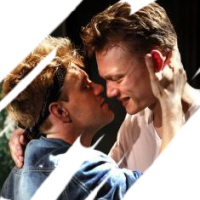 Whatever I saw immediately after Harry Potter and the Cursed Child was going to have a tough act to follow, but this is going from the sublime to the ridiculous: Going from a seemingly unlimited budget to zero budget isn't necessarily a bad thing, some of my favourite shows have been in rooms above pubs, including this one. But going from a script carefully crafted by experts to a confused vanity project is something else entirely: Journalist Simon Blow's first, and hopefully last play, The Past is a Tattooed Sailor is based on his own youth and real experiences with an elderly relative (in fact the publicity has been so keen to point out it's about Bright Young Thing Stephen Tennant that I'm not sure why he bothered to change the names.) Upper-class but orphaned and now penniless, Joshua (Jojo Macari) discovers he still has a wealthy relative, his great-uncle Napier (Bernard O'Sullivan,) who had a colourful youth and now lives in a crumbling country house reliving it from his bed.

Ignored by the rest of his family even though they hope to inherit his money, Napier is pleased to have Joshua to tell his name-dropping stories to, and suspicious but excited by him bringing along his bit-of-rough boyfriend Damien (Denholm Spurr.) 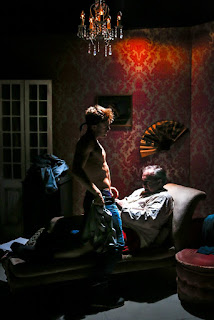 The performances are variable, but even the better actors in Jeffrey Mayhew's production struggle to make sense of, let alone breathe life into, Blow's script. Joshua soon sees ghosts of Napier's mother Helena (Elizabeth George,) as well as that of Napier's younger self (Nick Finegan,) and they all wander round for a couple of hours talking about... something. Nobody seems to have told Blow that consecutive lines of dialogue are usually connected in some way, so the characters' lines consist either of self-indulgent speeches or bizarre non-sequiturs; the best that can be said for this is at least it reflects the self-absorption of the characters, that none of them are listening to anyone else's lines. It's notable that the wittiest lines are all the older Napier's, presumably direct quotes from a genuine eccentric rather than Blow's invention like the rest. 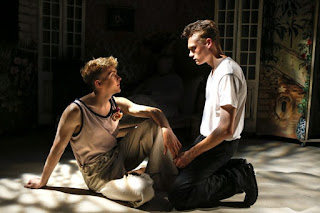 There's also an unfortunate lack of attention to detail: I know period costumes are hard to come by without much budget, and no costume designer is credited, but the sole concession to the 1980s setting is Damien's "Frankie Say Relax" T-shirt, and in the most egregious anachronism Spurr later changes into one that's meant to look like it says "Jack Daniels" but clearly says "Jack Bauer" - the audience is inches away from the cast guys, we can read every line, so we know you went to see Francis Bacon in a 24 shirt, a TV show that wouldn't exist until a decade after his death. (It also meant I was staring at Spurr's chest even when he didn't have his nipples out.) And ultimately there's something woefully misjudged, in 2016, in staging a play whose only real plot concerns whether the lead will get all of a wealthy relative's estate, or just a percentage of it - good luck getting anyone under 60 to sympathise with "oh no, will he be able to afford a horse?" Of course its biggest crime is that on this evidence, the past is a painfully dull experience.

The Past is a Tattooed Sailor by Simon Blow is booking until the 27th of August at the Old Red Lion Theatre.