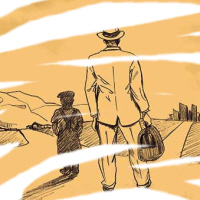 Much as I have issues with Richard Rodgers and Oscar Hammerstein II - mainly to do with the varied and jaw-dropping ways they find to be offensive, and the fact that "Some Enchanted Evening" on a loop for three hours doesn't constitute a musical - there's no denying the position they occupy in American musical theatre - essentially regarded as its creators - and the love for them worldwide. So the fact that one of their shows has never actually been staged in the UK before has to make you wonder why, while still being fascinated to find out what it's actually like. Their third collaboration after big hits Oklahoma and Carousel, Allegro tanked on Broadway in 1947 but Southwark Playhouse's perennial re-interpreter of classic musicals, Thom Southerland, and his choreographer Lee Proud throw everything at this attempt to make sense of the story of Joseph Taylor Jr (Gary Tushaw,) a talented small-town doctor who's disillusioned when he takes a high-paying job in a big city.

Sometimes I can get tied up in knots trying to explain even the basic plot of a show, but that's pretty much covered everything, which is one of the reasons Allegro doesn't emerge as a lost classic, but rather explains its obscurity. 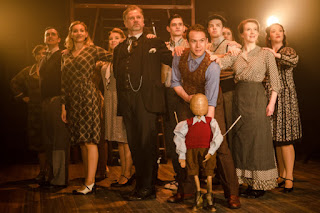 Where Rodgers and Hammerstein usually had a source story, Allegro was designed as a technical exercise, the story of a man from the moment of birth to that of death, with the supporting cast providing a Greek Chorus commenting on the action and his thoughts. The cradle-to-grave conceit was ditched pretty early on, with the story only taking us from Joe's birth to the age of 35; the high-concept use of the chorus also ends up being used in a fairly half-hearted way. The show's politics aren't problematic in the same way as in their bigger hits - there's no actual racism, or even that old favourite "you can't really trust a man unless he's killed someone." There is some misogyny that's very much of its time, beginning with the assurance that it's a wife's duty to agree with everything her husband says, and particularly seen in the way Joe's childhood sweetheart Jennie (Emily Bull,) is portrayed as a manipulative harridan who ends up cheating on him with a villainous millionaire (Samuel Thomas.) But compared to Carousel's "if it hurts when your husband beats you it's probably your fault for not loving him enough" sentiments this is small fry. 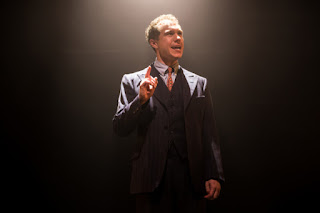 Maybe it's forgetting to make offensiveness actually border on insanity that was R&H's misstep here, after all they're out of their comfort zone. But although they also don't drive one single song into the ground this time, it may be because there really isn't one worth repeating - the one standout is "The Gentleman is a Dope," made a highlight by Katie Bernstein as Emily, Joe's nurse and just about the only woman in the show who isn't evil, dead, or evil then dead (actually Leah West as Beulah, the only other girl Joe ever dates, is likeable, but she's soon cast aside for the grasping girl-next-door Jennie.) 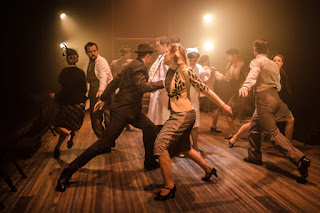 Not that Southerland and his team have treated Allegro with anything less than their full effort: Anthony Lamble's traverse set features a couple of staircases as well as a multi-level platform that goes right up to ceiling height, all slid around the stage by the energetic and well-choreographed cast. It's good to see Avenue Q's long-serving Christmas Eve Jacqueline Tate in the cast, and I also won't be complaining about Benjamin Purkiss gratuitously stripping to swimming trunks as another of Jennie's romantic interests. But excellent though the production might be, it's still not good enough to disguise the shortcomings that have kept the show off the stage for so long - and a traverse staging certainly doesn't disguise the amount of people quietly nodding off on the opposite seating bank.

Allegro by Richard Rodgers and Oscar Hammerstein II is booking until the 10th of September at Southwark Playhouse's Large Theatre.