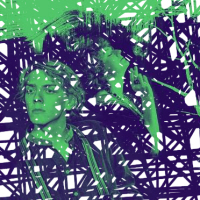 Last year's big one-day, three-play marathon, The Wars of the Roses, followed Shakespeare's rarely-performed Henry VI plays with the much-loved and frequently revived Richard III. So too this year when it's Anton Chekhov's turn, and after the very obscure Platonov and fairly rare Ivanov, Young Chekhov at the National takes us up to his first big hit, and my personal favourite, The Seagull, in the same theatre where I first saw the play. Tom Pye's set for the whole trilogy has, as far as possible, avoided the usual stuffy drawing rooms and, taking it's cue from Chekhov's love of a disappearing natural world, been dominated by dead trees and shallow waters. This water has colonised even more of the stage for the finale, with all of the upstage area now a lake, through which characters sometimes wade to make a dramatic entrance.

This is the scenic location for Konstantin (Joshua James) to premiere his experimental new play in front of what should theoretically be a sympathetic audience of friends and family. 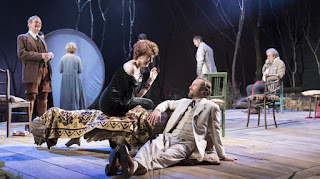 But when that audience includes his mother, the celebrated actress Arkadina (Anna Chancellor,) anything that pulls attention from her just won't do, and the mockery his (admittedly dreadful and pretentious) play receives sends the already insecure Konstantin down a dangerous path. 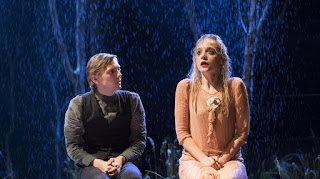 What comes across well here is the story as a sequence of unrequited loves: Schoolteacher Medvedenko (Pip Carter playing him as affably ineffectual rather than the usual dullard) loves Masha (Jade Williams,) who loves Konstantin, who loves Nina (Olivia Vinall putting in a lot of work over the whole day, culminating in an understated look at a character's mental collapse,) who loves Trigorin (given a hint of camp by Geoffrey Streatfeild, perhaps agreeing with Tennessee Williams about the character's repressed sexuality.) 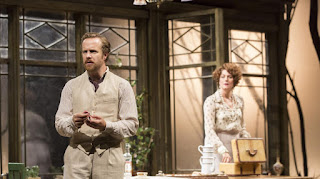 Jonathan Kent's production is a strong one that picks up on both the comedy and tragedy of the play, and probably works perfectly well on its own (although audiences who only see this one might be baffled by the large building upstage right, which doesn't really get used this time around.) But it also serves as the jewel in the crown of a day that went surprisingly quickly (given some individual productions of Chekhov can feel like they last days.) You can see the development of characters like the wealthy but miserly woman into the more complex monster of Arkadina, while the doctor who can't really do much so doesn't pretend he can, finally finds a sympathetic version in Adrian Lukis' Dorn. These productions have found the strengths in even Chekhov's dodgier early efforts, so it's no surprise to see them sparkle in the play that yes, is by far the most frequently performed of the trio, but clearly, deservedly so.

The Seagull by Anton Chekhov in a version by David Hare is booking in repertory until the 8th of October at the National Theatre's Olivier.