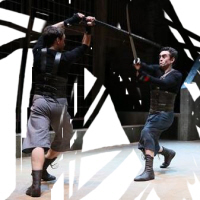 I saw my first Shakespeare production aged 15, an RSC production of Macbeth which, like the company's entire ensemble seasons in those days, came to the Barbican. The Macbeths I've seen since must go into double figures but not every play is as frequently revived, and thanks to my largely eschewing theatre in the late nineties and early noughties, completing the set ended up taking 27 years but I've finally seen every canonical Shakespeare play^ on stage. Nowadays you have to go to Stratford-upon-Avon to catch the less popular titles but it's good that I was back at the RSC to tick off the last show on the list, and also appropriate that it should be what's generally accepted to be Shakespeare's final extant play, and to this day the most obscure, the Fletcher collaboration The Two Noble Kinsmen. Set in the same time and place as A Midsummer Night's Dream, it seems Shakespeare thought all Theseus (Gyuri Sarossy) and Hippolyta (Allison McKenzie) ever did was fight wars and watch shows, because once again they spend the start of the show doing the former, and the rest of it doing the latter.

Athens has just crushed Thebes in a battle, and among the captured Thebans are the titular cousins, Palamon (James Corrigan) and Arcite (Jamie Wilkes,) whose nobility impresses Theseus so much he spares their lives. Lifelong best friends, while in prison they spot Hippolyta's sister Emilia (Frances McNamee) through the bars and both fall in love with her, instantly falling out. 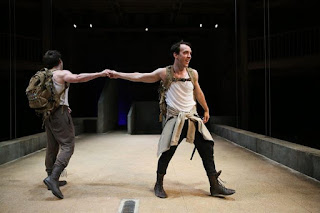 A relative soon pays the ransom for Arcite to be released, and although he's meant to be banished from the city he returns to try and court Emilia. Palamon isn't going to sit back and let his cousin get the advantage though, and with the help of the smitten Jailer's Daughter (Danusia Samal) escapes to try and take down his rival. Based on The Knight's Tale from Chaucer's Canterbury Tales, The Two Noble Kinsmen's obscurity is only partly down to its quality. Blanche McIntyre's production is strong but can't cover all of the play's messiness (like an interminable opening scene justifying the war on Thebes, when why it actually happened is of no relevance to the plot.) But if being a bit shit was enough to keep a play off the stage there wouldn't be so many productions of Romeo and Juliet or The Winter's Tale, so there's more at play here: It's also a bit of a fluke of history that, while there's never been any authorship question surrounding it, the play got missed out of the First Folio and, even though the much more dubious Pericles was eventually restored to the canon, for centuries editions of the "complete" Shakespeare‡ followed suit in omitting the Kinsmen. 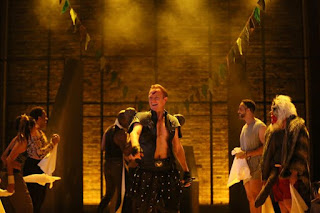 McIntyre's production takes the approach of dealing with a problematic play by embracing and expanding on the oddity, especially when it comes to Anna Fleischle's designs: The stage is a gladiatorial arena, cages flying down to the sides of the stage at times to represent the prison the cousins find themselves in, but in practice lending the impression of a cage fight. It's in the costumes where everything goes particularly barking, setting the play in no one time period and often giving the impression that this is Mad Max as it might have been produced by John Nathan-Turner. It's for the most part a very effective approach, although at times the bizarreness can be distracting - like when the sisters go hunting in the forest, Emilia with a bow and arrow, Hippolyta with A FUCKING CHAINSAW. (And why was Leon Lopez going to be executed with Palamon's men, when he was actually one of Arcite's?) 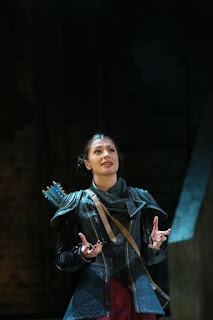 Initially springing quite naturally out of the main story, the subplot of the Jailer's Daughter (I'm not saying Shakespeare and Fletcher were phoning it in but several important characters don't have names) starts to feel increasingly tangential, as her unrequited love drives her mad and a quack doctor (Hollywood Body Double Leander Deeny) recommends pretending a similarly nameless Wooer (Patrick Knowles) is her beloved Palamon. But Samal sensitively handles the character's madness even as the play itself seems to lose interest in it. 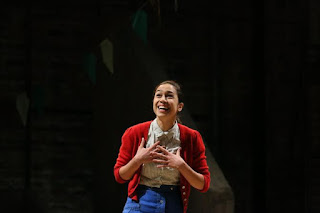 But most importantly, McIntyre doesn't just treat The Two Noble Kinsmen as an exercise in turd-polishing, making sure to actually find the genuine strengths of the play. It's generally pretty cynical about love, at least the heterosexual, "at-first-sight" variety, but the play is very positive about same-sex relationships of all varieties from friendship to more (even more than the rumours of Shakespeare's bisexuality, it seems likely Fletcher was more of a meat person than a fish person.) Wilkes and Corrigan bring to life a strong scene in which, sworn to kill each other, the cousins still carefully help each other with their armour. The constant procrastination is funny but also moving, as it's clearly not so much fear for their own lives as not wanting to hurt each other that's holding them back. 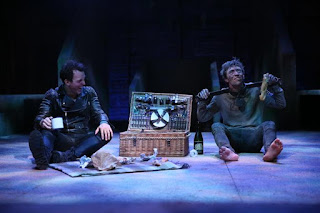 Meanwhile Theseus is explicitly shown as being in a physical relationship with his lifelong friend Pirithous (Chris Jack,) even in front of his new wife, and the always-excellent McNamee latches onto the suggestion that the reason Emilia swears off men is that she's more interested in her female friend. (Still, it doesn't reflect too well on Arcite's personality that she has so much trouble choosing which of the cousins' lives to save - "Well, I've got to know this one quite well over the last few weeks but the complete stranger's quite cute so *scales gesture*") Overall, the production won't fool anyone that this is one of Shakespeare's best works, but it doesn't deserve to be quite as far out in the cold as it actually is.

The Two Noble Kinsmen by John Fletcher and William Shakespeare is booking in repertory until the 7th of February at the Swan Theatre, Stratford-upon-Avon.

^I haven't seen Edward III but although that's been gaining a lot of traction lately it seems a long way yet from being generally accepted as canonical, so I'm considering that one as a bonus entry, to be added to Double Falsehood.

‡including the first edition of the plays I owned
Posted by nick730 at 22:34