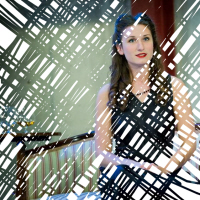 Continuing my current theatrical theme of obscurities from big names, J.B. Priestley's third play The Roundabout is largely forgotten, but anything by the author of An Inspector Calls is usually worth taking a bet on. Actually, if the publicity had reminded me at the time I booked, as it does now, that Priestley was also the author of When We Are Married I might not have bothered, and we're very much in the realm of the latter play here, in a dusty comedy of manners. Fifteen years before An Inspector Calls, class inequalities are already a subject Priestley looks into, but Communism is more of a punchline than a matter for discussion here. Lord Kettlewell's (Brian Protheroe) finances are in freefall, but it hasn't stopped him from sticking to his usual routine of having guests - both invited and uninvited - at his country pile for the weekend. Among them is his mistress Hilda (Carol Starks,) as he's been separated from his wife for the last decade.

It's not just Lady Kettlewell (Lisa Bowerman) he hasn't seen for ten years but also his daughter, now aged 21. So it's a surprise when Pamela (Bessie Carter) appears out of the blue, a newly-minted Communist who's just returned from a trip to the USSR. 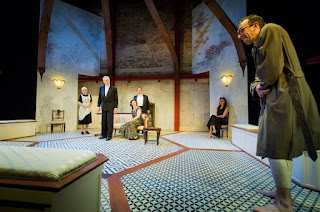 Unfortunately there's very little Hugh Ross' production can do to bring the dry and overwritten dialogue to life, and a piece that I'm sure raised plenty of laughs in 1933 struggles to raise a smile today. There's something admirable about Priestley's attempt to create a strong, independent central female role, but he fluffs it as Pamela is a bullshitter whose principles are pretty much all for show; in her professional debut, Carter's charm and presence salvage a problematic character. The best comic moments come from family friend Churton (Hugh Sachs,) the only one of the privileged characters to really understand and embrace the ridiculousness of his class; and there's a strong performance from Steven Blakeley as Comrade Staggles, a sexually frustrated Communist Pamela brought back with her. The final act's opening, putting these two opposites together, is the play's strongest moment. 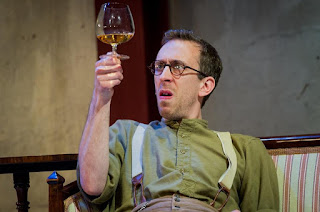 But the fact that we're very early on in the playwright's career is pretty apparent, particularly in the heavy-handed plotting and surplus of characters: Hilda is dispatched with before she's had much chance to make an impact, and Pamela's former love Alec (Ed Pinker) gets planted into the story early on then completely forgotten about until he's needed again - evidently he's been around the house all day but nobody notices him until the plot requires it. Throw in a production that tries, but feels under-rehearsed (still quite a lot of stumbling over lines,) and there's few moments where the evening doesn't drag.

The Roundabout by J. B. Priestley is booking until the 24th of September at Park Theatre 200.