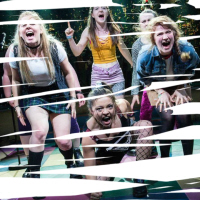 The last time the National Theatre hosted the National Theatre of Scotland it was very much the story of the men in charge, but in this latest visit, directed by the NTS' former Artistic Director Vicky Featherstone, it's all about young women making the most of things. Lee Hall's Our Ladies of Perpetual Succour follows six girls from the titular Catholic school in the Scottish port of Oban. The school's sky-high teen pregnancy record has earned it the nickname Virgin Megastore, but they intend to show a much more restrained front when the choir travels to Edinburgh for a competition. The girls themselves have other ideas, and sneak out the night before the contest to see the city. Orla's (Melissa Allan) cancer was supposedly cured at Lourdes, and as a result she's been showered with money she plans to spend getting drunk and trying to find a boy to lose her virginity to.

It's a raucous night out that also, of course, sees the girls deal with some growing pains, like Fionnula (Dawn Sievewright) realising she's attracted to the middle class outsider in their group, Kay (Karen Fishwick.) 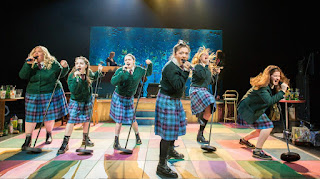 Though set in the Nineties when Alan Warner's source novel The Sopranos was published (the title changed for the stage presumably so people didn't think they'd be watching a show about mobsters,) the music that punctuates the action takes its cue from Kylah (Frances Mayli McCann,) who sings in a covers band and loves her dad's taste in music. So there's a lot of punky, angry or funny interpretations of, mostly, ELO songs - with the rare return to the religious choral work they're meant to be singing. 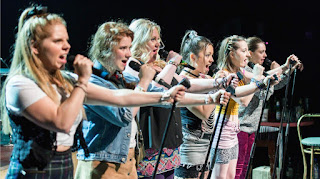 The music is key to the production's energy and likeability, although equally so is the potty-mouthed dialogue and chemistry between the actors, who each plays a distinct and recognisable character as well as a variety of nuns and sleazy older men who hit on the schoolgirls. These are young women whose lives are likely to be hard, and there's moments of pathos - notably Manda (Kirsty MacLaren) admitting that as a special luxury she adds powdered milk to her bathwater to make her feel like Cleopatra ("from the Carry On film.") But primarily this is about their sense of fun and of discovering the world, and although surprisingly short on actual laugh-out-loud moments it's a loud and likeable evening.

Our Ladies of Perpetual Succour by Lee Hall, based on The Sopranos by Alan Warner, is booking until the 1st of October at the National Theatre's Dorfman.