Theatre review: They Drink It In The Congo 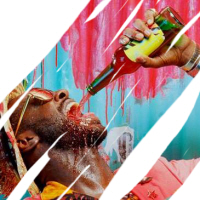 In among various classics that the Almeida is staging over the next year or so are a pair of premieres, starting with Adam Brace's look at white guilt and a country often called the most dangerous place in the world - but in the UK still probably best remembered as a soft drink jingle - They Drink It In The Congo. Stef (Fiona Button) works for a government-sponsored charity organising a festival of Congolese culture to raise awareness of the country and its various horrors. Together with the Congo-born Anne-Marie (Anna-Maria Nabirye) she leads the steering committee that is trying to agree on the acts, as well as ensuring there's an authentically Congolese voice in the decision-making. But even the seemingly simple elements prove impossible to reconcile, and that's before the organisers start receiving death threats.

Luis (Richie Campbell,) leader of the London cell of a violent protest group, sees the festival as endorsing the corrupt government, and galvanises his unconvinced men to turn their threats of aggression into reality. 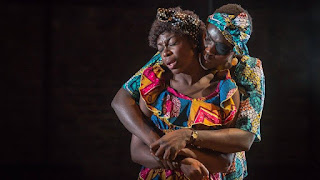 Michael Longhurst returns to the Almeida to direct a production full of ideas - sometimes interesting, sometimes confusing. In a neat reversal of the usual use of captions, dialogue meant to be spoken in the Congolese language Lingala is spoken in English, and translated back to the original on screens. Much of the country's trouble has historically been linked to the West wanting its mineral resources, and at present their main use is in SIM cards; this comes to life on stage in the form of Oudry (Sule Rimi,) unseen by the other characters, who announces every phone call and email Stef receives, and increasingly becomes an avatar for her mental state. 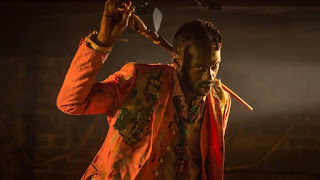 Jon Bausor's set is a traverse meeting room, and while it may not be the biggest coup de théâtre in a year that's been pulling out all the stops, the scene of - SPOILER ALERT - the tiles shattering in slow motion beneath Oudry's feet as entropy kicks in is an impressive one. Longhurst tackles Brace's tricky tone well: There's constant references to atrocities and a few scenes of violence, and though Stef easily dismisses a writer's (Pamela Nomvete) argument that at its heart this is a feminist issue, all of Luis' attacks are on women; but there's also a constant return to, sometimes quite broad, humour: A stand-up comedian (Tosin Cole) who has to explain where the laughs go, a band who exclusively play African-themed covers of Smiths songs, and a terrorist video that descends into slapstick. 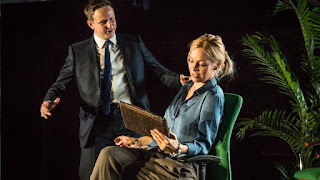 There's a very effective and entertaining first act but in the second Brace falls into a common trap of plays that deal with vast and contentious subjects: Early on there's a well-constructed scene in which Stef and Anne-Marie try to give PR man Tony (Richard Goulding, taking a break from his very specific typecasting as Prince Harry,) a potted history of the Congo in five minutes, a task that proves unsurprisingly impossible. But it's not quite a lesson the play itself learns, and as Brace tries to juggle the various different interest groups and tensions with a backstory on why Stef does what she does it all starts to feel bloated and confused - unfortunately an interesting play and solid production descends into an overlong muddle I lost patience with.

They Drink It In The Congo by Adam Brace is booking until the 1st of October at the Almeida Theatre.