Theatre review: As You Like It (Marjanishvili Theatre / Globe to Globe) 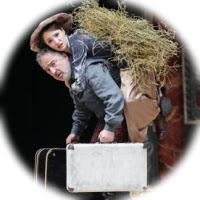 Although I sampled last year's Globe to Globe festival of foreign-language Shakespeare, I kind of felt as if I cheated as only one of the shows I saw was in a language I don't understand. I'll be making up for it a bit this year though as the Globe is scattering a few repeat visits throughout its 2013 season, and I'll be checking out 3 of the 4 returning shows. First up, a production I'd had recommended to me as the highlight of the 2012 season, As You Like It in the Georgian language, performed by Tbilisi's Marjanishvili Theatre company. Although Lasha Bugadze's version of the text doesn't seem to be too literal a translation, with the occasional change and extra scene, for the most part this feels absolutely like the As You Like It I know and love, the story of various people exiled to the forest by a usurping duke, in particular his niece Rosalind (Ketevan Shatirishvili) and the disinherited nobleman Orlando (Nika Kuchava) with whom she's fallen in love.

This is a slickly professional production in the guise of a much more amateurish and chaotic one. A small central platform serves to tell Shakespeare's story, with the rest of the stage serving as the actors' dressing rooms and backstage area, from which they also sometimes provide music and sound effects. We see Rosalind initially struck with stage fright, Besho Baratashvili's Duke Frederick needing to be prompted for almost every line, and many of the show's laughs coming from the breaking of the fourth wall between the in-character actors centre stage, and the out-of-character cast members surrounding them. 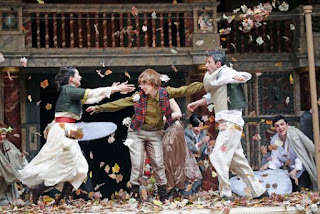 After a few hot days I had a return to chillier weather for my first Globe trip of the year, but at least it suited the autumnal feel of Levan Tsuladze's production, which increasingly scatters dead leaves across the stage and joyously throws them into the air. There's some lovely little staging touches that create both humour (the way Kuchava's rather gormless, chubby Orlando defeats the much larger Roland Baratashvili's Charles the wrestler, a lovely bit of mimed fishing) and beauty (Oliver's destruction of Orlando's home.) After a strong opening half-hour the production runs out of steam for a bit, although this is partly a result of the way the play has to establish its plot strands. But the energy kicks back in with a vengeance after the interval, especially with the arrival of Manana Kozakova's pitch-perfect Audrey, whose "flirtation" with Malkhaz Abuladze's Touchstone is hilariously devoid of subtlety. 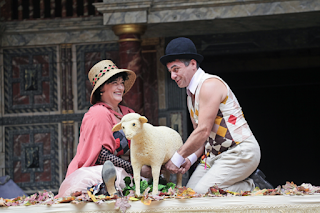 With a lot of strong visual touches and earthy humour Marjanishvili's production is pretty much a perfect fit to Globe to Globe, and although admittedly the story's one I know well, the language barrier never seemed a problem. Even in the talkier scenes there's moments of universality, Jacques' (Nata Murvanidze) instantly recognisable Seven Ages of Man speech culminating in the arrival of the ancient Adam (Ketevan Tskhakaia) just as it reaches its conclusion.

As You Like It by William Shakespeare in a version by Lasha Bugadze is booking in repertory until the 11th of May at Shakespeare's Globe.