Theatre review: Larisa and the Merchants 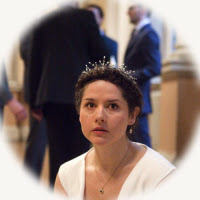 The effervescent Larisa (Jennifer Kidd) is poor but popular with the men of her small port town on the Volga; her lack of a dowry is the only reason she's not yet married. Her relationship with the aristocratic Sergei (Sam Phillips) ended in heartbreak and, on the rebound, she's accepted the proposal of the smitten, penniless civil servant Karandyshev (Ben Addis.) When Sergei returns to town there's clearly still something between the two, but as Larisa is tempted to leave her fiancé for a man who's already betrayed her once, she doesn't know how close she is to its happening again: Having lost most of his money, Sergei has agreed to marry an heiress so he can restore his fortunes, and living in the style to which he's accustomed will always trump any feelings he might have for Larisa.

Alexander Ostrovsky's Larisa and the Merchants, in this new version by Samuel Adamson, is a tragicomic satire on capitalism that consistently (perhaps a bit too heavy-handedly at times) brings a person's value as a human being down to the level of their financial worth. Jacqui Honess-Martin's modern-dress production feels chillingly relevant in that respect. The titular merchants are the older Knurov (Dale Rapley) and young upstart Vasya (Jack Wilkinson,) who was Larisa's childhood friend but having made his money now also sees her as a commodity. 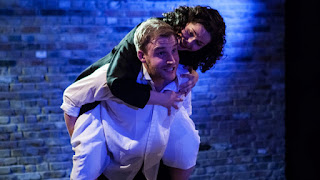 Phillips' Sergei is charming and handsome enough to make some sense of Larisa's delusion that he's "perfect," despite the fact that it's clear from his first appearance that he's a pretty obnoxious character. Addis' buffoonish Welsh Karandyshev provides some comic relief, as does Morgan Philpott's "Robinson," an unemployed, drunken actor paid by Sergei and Vasya to pose as an English lord. Both however also suggest an edge of menace that comes from one humiliation too many. 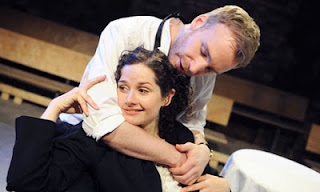 Signe Beckmann's set is a long traverse, on which each act is preceded by a lively Russian dance (no choreographer is credited, so presumably it's movement director Anna Morrissey's work) that really brings the space to life. Where Honess-Martin's production falters a bit is in trying to reconcile the different moods of the play, the comic and dramatic moments seem to be playing against each other so neither ends up quite as effective as they might be. An interesting evening though, with some nice performances. (But where have Arcola 2's tiny seat cushions gone? Those bare wooden benches make two hours punishing work for buttocks.)

Larisa and the Merchants by Alexander Ostrovsky in a version by Samuel Adamson is booking until the 1st of June at Arcola Studio 2.