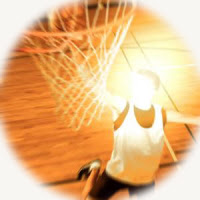 American Playwright Bekah Brunstetter's new sci-fi comedy Nothing is the End of the World (Except for the End of the World) was originally written for a performing arts high school, and features in its lineup all the archetypes of a US teen movie: There's the popular but highly-strung class princess, Jessica (Skye Lourie,) her sexually confused jock boyfriend Kit (Christopher Webster,) the angry rock chick Emma (Amanda Hootman,) Esther, whose parents are religious fundamentalists obsessed with the End of Days (Sheena May,) flamboyant drama geek Danny (Robin Crouch) and outcast Lucy (Natalie Kent.) But in their midst is dropped an even bigger pair of outsiders: Godfrey (Dan Crow) and Olive (Lisa Caruccio Came) are artificially intelligent androids built from the bodies of dead humans. Their attempts to assimilate with the human teenagers will be filmed for reality TV.

There couldn't really be a more appropriate setting for a story about characters learning how to be human than among a bunch of teenagers, and though the newcomers' speech and behaviour isn't as convincingly human as they think it is, they're hardly the first people to find themselves outcasts at a high school. While Godfrey remains coldly superior and slightly sinister, Olive is from the start more eager to please, with very human dreams of joining the dance club. 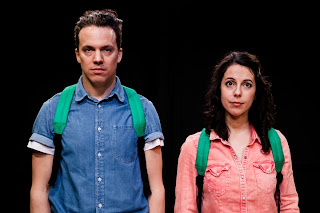 There's a sweetness that underlies Brunstetter's play but not enough to be cloying, because the conceit is largely played for laughs, and very successfully so. Director Max Pappenheim has injected a lot of pace and the comic timing is spot on, both in the delivery of the funny lines (including a few that would be far from funny out of context but the performances make them so) and in the moments of physical comedy - a scene of two humans and two androids playing table tennis is the best example of the show mining the comic potential of characters who are just that little bit too perfect. 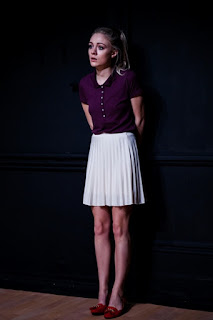 And Pappenheim has assembled a cast that I'll look forward to seeing more of in the future: Skye Lourie has appeared as a promising talent in the last year and continues to impress here, Jessica coming with a degree of vulnerability that stops her from just being a standard high school princess. May and Kent meanwhile find the inner mean girl in every outcast when the arrival of the androids means they're no longer bottom of the social pecking order. Crouch's Danny treats the presence of a TV crew as an opportunity for a 24/7 audition, but also gets some nice scenes with Hootman's Emma, who's dealing with the possibility of being exactly who everyone thinks she is, and Webster's Kit, who's trying to keep a secret that could jeopardise his position at the top of the school food chain. Crow and Caruccio Came meanwhile find a performance style that manages to blend a touch of the comically robotic with a growing inner turmoil at life not conforming to logic. 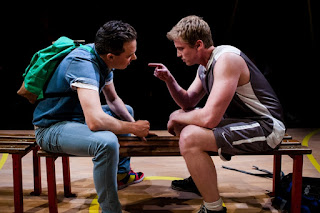 Susannah Henry's designed a very simple traverse set based around a basketball court, on which Pappenheim has given the production a rather filmic quality to match the reality TV subplot. This never-seen crew are represented by a disembodied voice (Michael J Hayes) occasionally asking the students to replay emotions they just experienced for real, and the conceit allows for a few digs at the medium and its manipulation of reality (Ian particularly liked a gag about the subtle variations the producers insist exist between different kinds of reality show.) The subplot does threaten to throw a bit too much into the mix of a comparatively short play, but I thought Brunstetter just about pulled it off. 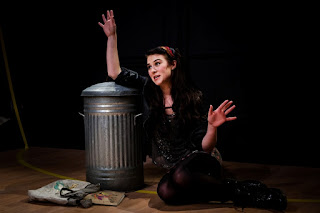 Nothing is the End of the World (Except for the End of the World) is an entertaining little gem that's made by the enthusiastic, fun performances. As the title suggests, the play has fun taking on an age group where every little problem is a world-ending crisis, and having them face the genuinely apocalyptic idea of a race that could make humanity obsolete; but it does so with a lot of humour and ultimately a real sense of optimism.