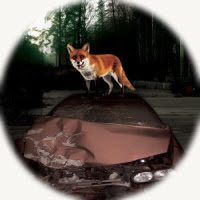 Actor Thomas Eccleshare turns playwright with the black comedy Pastoral1, which Steve Marmion directs at Soho Theatre, where centuries of urbanisation can't stem the tide when nature decides to take back the land. Moll (Anna Calder-Marshall) is a pensioner who lives in a tower block in an unnamed English city where, out of a sense of duty for reasons that remain vague, two young men look after her. But today Manz (Hugh Skinner) and Hardy (Richard Riddell) aren't just there to check up on Moll; they want to pack all her things and evacuate her because the city's being invaded. The weeds that have broken through her floor are a clue, as flora and fauna have turned aggressive and overpowered the humans. But plans for escape are put on hold when a family of three arrives at the door looking for a safe place to stay, and the six band together against nature. In any case, Moll's certain the Ocado man will be there with the groceries any time now.

This is an assured piece of writing that paints a picture of nature giving humanity a taste of what it's like to have your world crushed under a very different one: Literally, as concrete gives way to grass, and where shops used to be there's now a babbling brook. 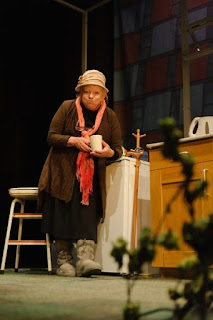 Eccleshare's writing does a good job of painting the world outside the flat, and I particularly liked the way the descriptions of towns becoming forests stayed true to what the title Pastoral conjures up, with the destruction of civilisation couched in the language of a rural idyll. As for how it's affecting things inside the flat, designer Michael Vale takes the plaudits here as his set is essentially a long sequence of coups de théâtre, bringing to the stage the invasion of the plants, and the havoc they wreak, in a number of inventive and sometimes amusing ways. 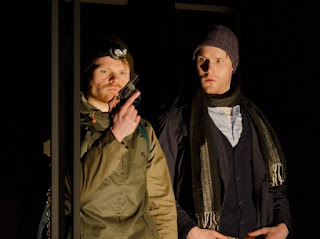 And this is most of all a funny play, which as well as the surreal humour of a plant-based apocalypse also has a lot of witty lines to recommend it, and a cast that know how to deliver them. I particularly liked the exchange between Hardy and Manz after the former's attempt at becoming a big-game hunter has less impressive results than expected, Riddell and Skinner an entertaining odd-couple. But the heart of the play is with Moll and Arthur (Polly Frame,) the 11-year-old boy who first brings his family to her door. I'm never a fan of the conceit where grown women play young boys, but Frame is more bearable at it than most, and as the story takes a sadder turn she and Calder-Marshall share some moving moments. 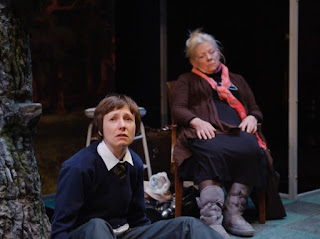 There's a lot to enjoy about Pastoral, which makes an environmental point while avoiding being preachy, simply turning the tables on the paving-over of the countryside and letting the story do the rest. Big business takes a lot of the blame, familiar high street shops getting name-checked as they fall in turn to become homes to deer and badgers. Although Ocado comes off better than most - Eccleshare suggesting that, one way or another, they'll make sure you don't go hungry.

Pastoral by Thomas Eccleshare is booking until the 8th of June at Soho Theatre.

1or Past Oral, as the usher insisted on pronouncing it
Posted by nick730 at 21:49