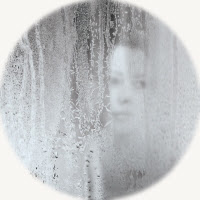 The Donmar Warehouse is more or less being handed over to Conor McPherson for the summer, with the premiere of his new play coming up but first Josie Rourke's revival of the play often called his masterpiece, The Weir. We're in a remote part of Ireland in 1997, where Brendan (Big Favourite Round These Parts Peter McDonald) runs a tiny pub. In a couple of weeks' time it'll be overrun with German backpackers but for the time being Brendan's entire clientele are Jack (Brian Cox) and Jim (Ardal O'Hanlon,) the village's other two resident bachelors. With no wives or children the three have little to do every evening but get drunk together but tonight they have company: Local businessman Finbar (Risteárd Cooper) has been showing around a newcomer to the area, and his tour ends at Brendan's pub. When the attractive Valerie (Dervla Kirwan) arrives, the four men soon launch into colourful local tales to impress her.

Conor McPherson's writing often circles around the idea of ghost stories, and this is what the men end up telling. But Jack's story of fairies tapping at the window, Jim's phantom paedophile and Finbar's haunted child strike an unexpected chord with Valerie, who has her own reasons for wanting to latch on to tales of the supernatural. 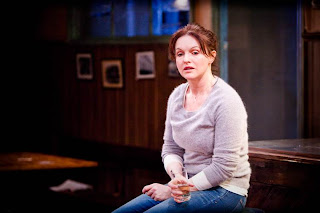 Tom Scutt's set is a convincing small pub, a rather makeshift old space with a lot of history but not much to keep it going in the present. And the large expanse of the Donmar's back wall that remains exposed above the set adds an eerie emptiness to the spooky stories when they start up (this is probably more effective if you're sitting in the circle like we were.) Although I could have done without Scutt adding a couple more pillars to the already-obstructed side view; fortunately the actors rarely hide behind them for anything too significant. 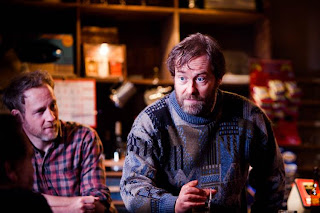 Other than a slight upswing for Julius Caesar things have felt pretty underwhelming at the Donmar since Rourke took over but The Weir really feels like an event again. Her production confirms the play's reputation, showing it as a piece of gentle, but devastating simplicity. There's plenty of humour throughout, both in the dialogue and in barman Brendan' total inability to serve any drink that doesn't come in a pint or shot glass. This helps soften the melancholy of a piece ultimately about grief and regrets, as does the fact that the ghost stories that form the play's centre are told with a genuinely spooky edge. 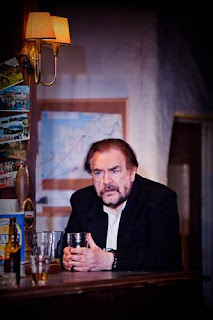 The performances are spot-on, O'Hanlon showing again that he's a good match for McPherson's prose, and Cox a moving portrait of bluff good humour coexisting with a sadness at life's missed opportunities (though Christopher, who turns out to have spent a lot of time in Ireland, had some criticisms of the Scottish actor's Irish accent.) McDonald provides the strong silent type holding everything together behind the bar, Cooper the flashy edge of the local boy with cosmopolitan pretensions and Kirwan a controlled portrait of grief that steers admirably clear of histrionics. Touch wood, I'm usually fairly lucky with other audience members and don't often suffer excessively noisy ones; but even so there's occasions when the audience's silence is overwhelming as a roomful of people are sucked into an actor's words, and there's plenty of these rapt silences for The Weir.

The Weir by Conor McPherson is booking until the 8th of June at the Donmar Warehouse.