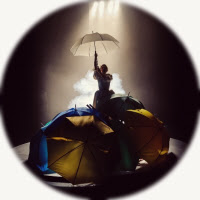 While I still live a stone's throw from Greenwich Theatre I might as well make use of it, and as I do like a bit of Marlowe Dido, Queen of Carthage was a good bet. It's playing in repertory with Lear in productions by director-designer Ricky Dukes, from Lazarus Theatre Company, with a pretty large ensemble cast.

A handful of Trojan survivors escape the fall of Troy, led by the demigod Aeneas (Joseph Tweddle,) but are shipwrecked off the coast of Libya. Aeneas' mother, the love-goddess Venus (Lucy Hagan-Walker,) comes up with a plan to save her son: She'll put a love spell on the queen of the area, Dido (Alice Brown.) Smitten with Aeneas, Dido will do anything he wants - like repair his ships. But once that's done and he prepares to sail for Italy, Carthage is still left with a powerful woman under a love spell, who's been spurned by the object of her affection.

Marlowe's play is dominated by the way the Greco-Roman gods toy with humans at a whim, but it's the humans who are left to suffer the consequences. He sets his thesis early on as Venus attempts to get Jupiter's help to save her son, but the king of the gods (Lewis Davidson) is too busy in bed with his page Ganymede (Harper James) to help her; so she's left to pursue her own path via Dido's heart. 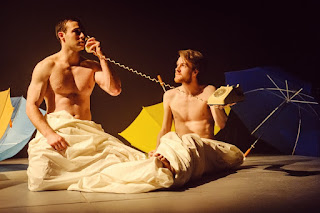 The huge cast is the production's only extravagance, the rest of the storytelling left to a lot of imaginative staging from Dukes, themed around multicoloured umbrellas that serve as everything from swords to flames. The play is quite a wordy one (Aeneas' lengthy description of the fall of Troy is famously parodied/paid homage to, depending on how you look at it, in Hamlet) and Dukes has done quite well to make it appear less so, with plenty of action and creative imagery - although the occasional use of the supporting cast walking in slow-motion in the background doesn't work, especially as the sheer amount of people mean it involves quite a lot of noisy rustling that's distracting. Fortunately this particular device is dropped after a while. 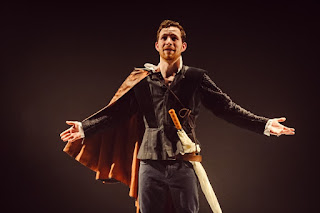 There's also a frankly terrifying puppet to represent Aeneas' son Ascanius - I know it's an expressionistic design but was he meant to look like he had horrific burns? But for the most part this production is full of positives. Marlowe's verse is tricky and the cast take a while to warm to it but most of them manage it and help make the speech natural. Tweedale and Brown make for a charismatic central couple, opting for Aeneas displaying some genuine interest in Dido rather than just using her obsession with him to get some sex; and yet when, once again, the gods intercede and demand he continue his journey, he parts from her easily. 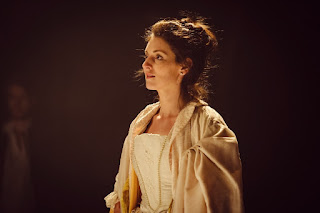 Alice Brown, meanwhile, starts understated in the title role but builds as the play goes on, to a steely determination at the end as she decides on the horrific fate she's chosen for herself. This isn't the most emotionally involving production of the play imaginable, but it's stronger on the storytelling front which is clear, pacy and imaginative. I hadn't planned to see the company's gender-swapped Lear (that's hardly a play in short supply this year) but having seen this, and with the show I'd planned to see on Saturday cancelled, I might just catch its final performance. And now here's another photo. No reason. 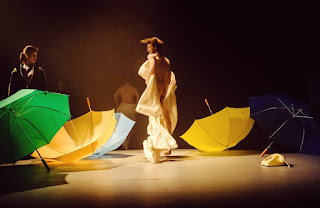 Hey, don't look at me. It wasn't my decision to include that in the company's publicity shots. I'm just using what's available.

Dido, Queen of Carthage by Christopher Marlowe is booking in repertory until the 1st of June at Greenwich Theatre.