Theatre review: A Human Being Died That Night 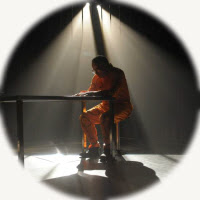 Anyone who's followed London theatre in the last few years must surely be excited about the prospect of Noma Dumezweni and Matthew Marsh being pitted against each other in a dramatic two-hander. Psychologist Pumla Gobodo-Madikizela's book A Human Being Died That Night chronicled her meetings with notorious South African police colonel Eugene de Kock, known as Prime Evil for his many crimes against humanity. In Nicholas Wright's stage adaptation, Pumla (Dumezweni) is serving on the Truth and Reconciliation Commission when de Kock's request to meet with the widows of three of his victims piques her interest. She arranges a series of meetings in prison where de Kock (Marsh) is serving 212 years, eager to explore the thin line between the majority of the population and those it deems to be evil. Her prime rule of not emotionally connecting with him is soon broken and she is forced to confront the fact that a "monster" is created out of the same humanity as everyone else.

Jonathan Munby's production actually starts in the downstairs bar, which is set up for a lecture by Pumla, but her recollections then come to life as we are led into the performance space. Paul Wills' set is a free-standing cell which the audience walks around to reach their seats, and in which de Kock is chained to his seat before the psychiatrist can interview him: Wright's play quickly defuses the elephant in the room by mentioning the similarity in setup to The Silence of the Lambs, although as well as being less schlocky the scope this story takes in so casually makes it all the more chilling. 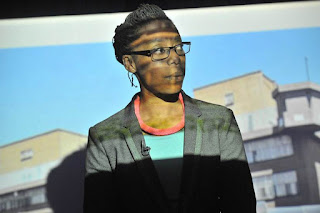 Pumla's own demons are not directly connected to de Kock, but there's certainly an element of her having to confront parts of the past that she too feels uncomfortable about - one lesson Gobodo-Madikizela seems keen to impress is that nobody came out of Apartheid smelling entirely of roses. Perhaps it's this initial distance that allows her subject to reveal himself as a fascinating case study from whom, ultimately, no straightforward lessons will be learned: Under no illusions about his guilt and unwilling to paint himself as a victim, for much of his life he's managed to reconcile his strong personal morality with committing horrific crimes on a daily basis. He maintains a sociopathic disconnect from the reality of most of his actions ("if you don't see something, it's invisible") which Pumla is determined to break through. 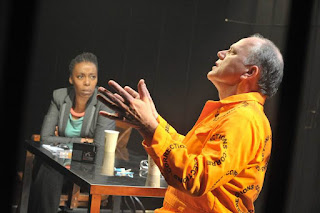 Some people might be disappointed at the lack of fireworks in Munby's production but for me this is part of what makes the show memorable: These are two very controlled performances, whose subtlety acknowledges how unexpectedly low-key their interactions are. Marsh is unnervingly charming as de Kock, his insistence on not swearing in front of a lady in no way striking him as a contradiction to the campaign of violence against her whole race that he took part in. Over the months and years the crimes in de Kock's past, for all their horror, take second place to the post-Apartheid problems South Africa still faces, and Gobodo-Madikizela insists on the importance of Truth and Reconciliation as more than just words, that you can forgive without forgetting.

A Human Being Died That Night by Nicholas Wright, based on the book by Pumla Gobodo-Madikizela, is booking until the 15th of June at Hampstead Theatre Downstairs.