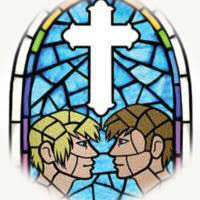 Though under threat of closure the Union Theatre ploughs on with another musical, this time the European premiere of Jon Hartmere and Damon Intrabartolo's 2000 show bare. Billed as "the rock musical," it's a coming out story set in a US Catholic boarding school where Jason (Ross William Wild) is the most popular boy. He's also having a secret relationship with his roommate Peter (Michael Vinsen, built in a Matt Damon-making factory.) Jason is happy to keep things as they are, worried not just about the reaction at school to him being gay, but also that the news might turn his father violent. Peter, however, is edging slowly out of the closet and wants his boyfriend to come with him. Their conflicting emotions play out during rehearsals for the school production of (inevitably) Romeo and Juliet.

bare deals with heavy subjects around the problems faced by gay teenagers, especially those growing up in a religious environment, but it tends to do it in a heavy-handed way. There are undoubted camp touches, like a vision of the Virgin Mary and two angels taking the form of The Supremes (a show-stealing turn from Hannah Levane, also appearing as an improbably broad-minded nun.) Paul Taylor-Mills' production takes this campness and runs with it, especially in the first act, and the result is a bizarre concoction that feels rather like Glee does Spring Awakening. 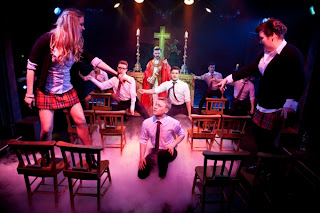 The cast are undoubtedly making the best of some wobbly material; Wild and Vinsen start off a bit too underpowered (the singers are un-miked, which is right for a space this size) but improve as the show goes on. Dale Evans somehow manages to make the character of Matt sympathetic, which is tricky given that he's presumably meant to be "boy in unrequited love with the popular girl" but his actions are more "relentless stalker." Lily-Jane Young also gets to show off her voice as the aforementioned popular girl Ivy. 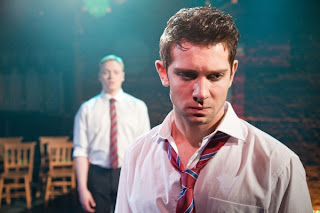 But the material is shaky, with no surprises to be had: When Jason tries to assert his heterosexuality by ending the first act with sex with Ivy, I doubt many people would have been shocked that Ivy spends the second act gesturing meaningfully towards her belly. (Also, Jason's wearing Andrew Christian underwear; I mean if that didn't tip Ivy off to which team he bats for, then she's only got herself to blame.) Melanie Greaney as Jason's overweight sister is lumbered with a character whose entire purpose is to keep mentioning her weight. And like many through-sung musicals, the songs themselves aren't particularly memorable, with the ballads particularly tedious. 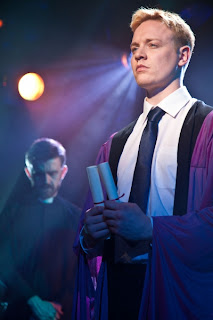 And there's a lot more of these ballads in the more sombre second act, when the high camp of the first is missed, and the cast do well to bring some solemnity to the increasingly soap opera-tinged goings-on. Am I glad I saw bare? Absolutely, although its entertainment value lies not quite in the way it was intended; the attempts at humour rarely raise a laugh but some of Racky Plews' more... emotionally demonstrative choreography did make it hard to keep a straight face at times. And the students' choice of casual-wear on a night out would suggest it's not just Jason and Peter who've got some coming out to do. "So bad it's good" would be too harsh a judgement but this is certainly an entertaining oddity.

bare by Jon Hartmere and Damon Intrabartolo is booking until the 25th of May at the Union Theatre.