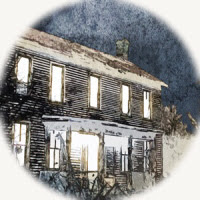 Touring company Sell A Door's production of Ibsen's Ghosts has opened its run at Greenwich Theatre but, oddly, doesn't seem to have any subsequent venues planned. Perhaps they got wind of a couple of higher-profile productions planned for later this year and decided to cut their losses? In any case, until the Almeida and ETT versions come along, here's a pretty straightforward telling of the controversial 1881 domestic drama. Mrs Alving (Deborah Blake) has spent the last ten years spending her late husband's fortune on an orphanage that'll bear his name. But this memorial to his good name is just the last part of an ongoing whitewashing of his character, as Alving was a prolific philanderer, and his widow is determined to bury this part of her past. But it becomes impossible to do when her son Oswald (Jason Langley) returns from Paris with a disease that sounds suspiciously like syphilis - it seems Oswald did inherit something from his father after all.

Anna Fox's production is a bit anaemic and possibly under-rehearsed (a few too many fudged lines and no real exploration of the characters) but it's a decent enough telling of the story - and the relentless unearthing of skeletons from the closet makes for a strong story to begin with. Blake is pretty good as Mrs Alving but Tamaryn Payne is uncomfortably wooden as the maid, Regina. And it was Liam Smith's bad luck that I had an actual Scottish theatre companion with me tonight to judge his accent, Jim saying he reminded him of a character from Crossroads. Robert Gill's horribly hypocritical and interfering Pastor Manders strikes the right notes of nastiness that come back to bite him when he finds out more than he bargained for; even if his costume does make him look like he's got up from dinner with his napkin still tucked into his collar.

Alfred Enoch's version of the text (from William Archer's translation) is a pretty traditional one; occasionally the phrasing gets a bit tangled but it allows for a couple of moments of humour. (Sticking to tradition does also mean a couple of unintentionally funny moments: Obviously there's a bit of dramatic license to be forgiven as Ibsen doesn't want to repeat the revelations twice, but avoiding using the critical word does mean Oswald instantly understands "your father had a love of life" as meaning "your father gave you syphilis. PS your girlfriend's your sister.") There's no depths explored in Fox's production, but it does have a pretty decent pace to it.

Ghosts by Henrik Ibsen in a version by Alfred Enoch is booking until the 5th of May at Greenwich Theatre.