Theatre review: The Victorian in the Wall 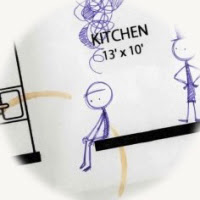 Will Adamsdale's The Victorian in the Wall is at the Royal Court Upstairs in a limbo period between Artistic Directors (although presumably someone had to OK its run?) and has for me an element of déjà vu as I saw a work-in-progress version of the show 18 months ago, as part of the Rough Cuts programme. Guy (Adamsdale) is a writer - or at least, he wrote an award-winning short story in the late '90s. What he actually does best is procrastinate, at the moment over a CBeebies script he's meant to be writing (he's stumped on the characters' motivation.) His long-term girlfriend Fi (Melanie Wilson) has a much more grown-up job (so much so that Guy has no idea what she actually does.) She's also the one who's organised the building works due to take place as the couple gentrify their Victorian East London flat.

But work takes Fi away in the week of the building works and Guy is left to "supervise" the builder, Rob (Chris Branch.) When they knock through the wall between the living room and kitchen, Rob and Guy discover a perfectly-preserved Victorian man, Mr Elms (Matthew Steer) living there. He, and another unexpected arrival, are the writer's latest diversion but may end up helping him get a move on with his life. 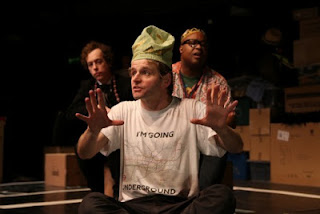 The play's starting point is a gentle satire on a certain kind of late-30s to early-40s middle class person who's moved into what used to be a working class area, and started knocking the walls down in former council houses. There's a lot of familiar preoccupations getting name-checked, such as the first thing Guy does when confronted with a man who's missed the last century (he makes sure Mr Elms catches up with The Wire.) His preconceptions about different classes are challenged by a builder who prefers ballet to football, and the recycling bins defeat him at every turn. His monthly donations to charity come back to bite him when an African orphan he's "adopted," Mr Fortunately Maybe (Jason Barnett,) turns out not only to be older than expected, but also on his doorstep calling him "daddy." 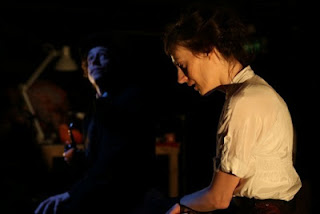 But as the show goes on these little satirical digs take a back seat to the story of Guy and Fi's troubled relationship, counterpointed with the doomed love for a music hall star that Mr Elms recalls in occasional flashbacks. Sound is a big feature of the show, which Adamsdale directs with Lyndsey Turner: As well as much use of Foley sound effects, there's regular musical interludes, in songs co-written by Adamsdale and Branch (with a conversational style of lyrics inspired in part, according to a post-show Q&A, by London Road.) 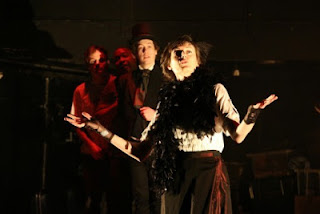 It all adds up to, if not the deepest show ever, a lot of fun that'll satisfy anyone who's enjoyed Adamsdale's past work. There was even a surprisingly moving turn of events in a love song following the less-than-straightforward journey of Guy and Fi from friends to lovers, and the rather fragile state their relationship is in. It may be easy to overlook while the Royal Court is having a creative facelift of its own around it, but The Victorian in the Wall is worth checking in on.

The Victorian in the Wall by Will Adamsdale with additional material by Jason Barnett, Chris Branch, Matthew Steer and Melanie Wilson is booking until the 8th of June at the Royal Court's Jerwood Theatre Upstairs.