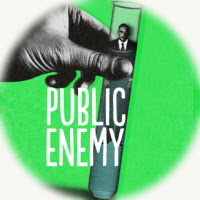 The Young Vic's reinvention of classic texts continues, and after a big hit with A Doll's House last year they turn to Ibsen again. This time though it's the team behind Government Inspector tackling the play, and as that was one of the rare shows I've left at the interval (and I wasn't even the only theatre blogger to do so) I approached Public Enemy with a bit of trepidation. Miriam Buether has once again lent a psychedelic edge to the design, fitting in with the 1970s feel director Richard Jones brings to David Harrower's translation. It's another of the wide, shallow stages Buether favours at the Young Vic, and it's not great for sightlines if you're at the front and particularly the edge of a row like we were - cricked necks are to be had. The general update from the 1880s to the 1970s works, though, and takes Ibsen's characters out of the familiar setting.

Written after the hostile reception to Ghosts, Public Enemy is a play filled with anger at how the public responds to unpleasant truths by shooting the messenger. In a Norwegian town whose economy is built around a spa, Dr Stockmann (Nick Fletcher) makes a startling discovery about bacteria in the water that's causing illness. The townspeople are initially grateful for his concern for their health, but once the potential cost from improvements and lost business sinks in, the pressure is on Stockmann to bury his findings. 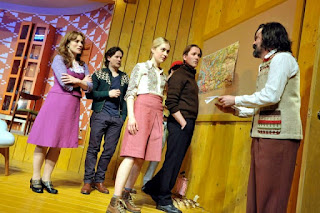 Though the garish visuals suggest a slightly surreal comedy, Jones' production actually plays things pretty straight, Stockmann caught in a nightmare of being tried in the court of public opinion, and Fletcher showing him becoming increasingly unhinged as a result. It's not, perhaps, as revelatory an approach as Carrie Cracknell's Doll's House was, but I still think it's effective, and always good to see an Ibsen play still working when taken out of its 19th century context of big old houses and vague references to fjords. The design, which sees a corporate logo prominent on the audience seating, is most effective in the fourth act when the doctor tries to share his findings at a public meeting - although again from our perspective it made for an awkward view. The immersive set includes branded water coolers as the audience enters - when someone helped herself to a cup an usher rushed to explain that it was actually part of the set "but don't worry, it's probably not poisonous." 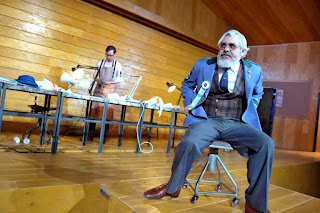 A strong cast includes Darrell D'Silva as Stockmann's brother, the town's mayor who spearheads the campaign to suppress the evidence, Bryan Dick as the apparently liberal newspaper editor whose support mysteriously disappears after Stockmann's daughter (Beatrice Walker) rejects his advances, and Niall Ashdown as the leader of the local small business owners. With the show running shorter than most Ibsen plays I did wonder how much of the original was contracted in Harrower's version - there seemed to be gaps where Stockmann's wife (Charlotte Randle) changed her mind about how much she supported her husband; and little explanation as to why the naval captain Horster (Adam Best) was the only non-family member to stick with them to the bitter end. 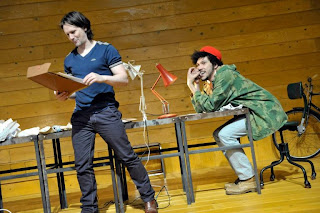 But it's an interesting take overall, and I was never tempted to leave at the interval this time (admittedly there wasn't one.) It's a thought-provoking play that's uncomfortable in a good way - as Stockmann's betrayal by his neighbours results in him edging further into furious madness, he makes a rant against democracy whose individual points are actually hard to disagree with, but whose ideas about listening only to the greatest minds are chilling if taken to their natural conclusion.

Public Enemy by Henrik Ibsen in a version by David Harrower is booking until the 8th of June at the Young Vic.

NB: There is one very sustained use of strobe lighting.
Posted by nick730 at 22:21