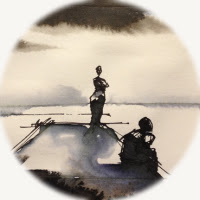 I've mentioned many times how much I like it when productions of Chekhov break away from the stereotypical naturalistic staging commonly associated with his work, and how glad I am this is happening more often lately. And now here's a production that not only does that, very successfully, but also looks beyond appearances to throw all sorts of preconceptions about the play out of the window. It's not surprising that the company to do it are Headlong, who've given The Seagull to adaptor John Donnelly and director Blanche McIntyre, and got something new back from them. At the lakeside house of famous actress Irina (Donnelly's text sticks informally to first names) her son Konstantin attempts to get the attention he craves from her by staging an experimental play, starring the local girl he's in love with. When this attempt fails, it sets both Konstantin and some of the people around him on a destructive path his mother remains blithely unaware of.

The first thing you can't help but notice in McIntyre's production is the design by Laura Hopkins. The costumes are present-day, but the set is somewhere outside of any specific time or place. The floor and back wall are off-white, made of a material that goes darker when wet, allowing temporary designs and words to be drawn on them; and the centrepiece is a long wooden platform that turns into a jetty, a walkway, and most memorably a see-saw in Act II, before finally becoming the table in Konstantin's study for Act IV. 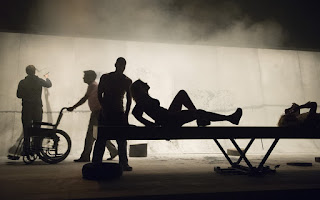 But beneath the design there's as much freshness in the characters, helped by Donnelly's lively, sweary translation and by the casting which doesn't always go for the obvious. I don't think it's great reviewing practice to refer back to past productions, but it's hard to put across my response to this version without bringing up the differences to what I've seen before. Abigail Cruttenden's Irina remains horribly self-absorbed but not quite as monstrous as she sometimes seems. She's far from a spectacular parent, but perhaps more unaware than actually neglectful. 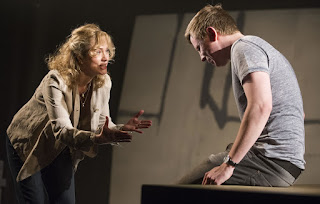 Alexander Cobb's Konstantin, who still calls her "mummy," is more obviously damaged from the start, to the point of being unhinged - perhaps this is what makes Irina look less culpable, everyone around shares the blame for missing some pretty clear warning signs. Cobb is convincingly smitten with the unobtainable Nina, who again is a new take to me as she's no ice queen, simply an easily-distracted country girl, Pearl Chanda first ignoring Kostya to swoon over topless workman Yakov (Eddie Eyre) before the fame of visiting writer Boris becomes irresistible to her. Nina's trajectory forms a contrast to that of Jenny Rainsford's Masha, who starts out glamorous and confident before rejection by Kostya and marriage to Semyon (Rudi Dharmalingam) brings her down. 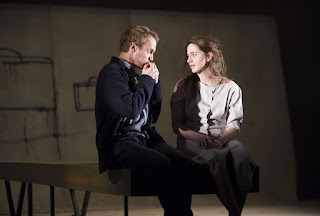 And as the destructive influence that flies into town, Gyuri Sarossy is no suave sophisticate. Instead his Boris is obviously a total mess, his effect on women as out of control as his career writing highly successful novels he himself thinks are terrible. In a particular indignity (and one of the more obviously reaction-baiting moments of the production) Irina puts him back under her spell with an onstage hand-job. 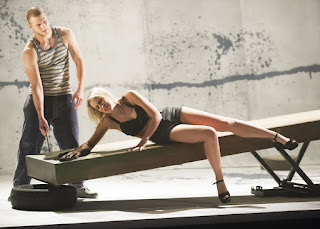 This is real 21st-century Chekhov, and it's fascinating to watch. I hope to people unfamiliar with the play it has the full force of a new story; from the perspective of someone who saw his first Seagull what must have been 20 years ago, it becomes a new story. And despite the attention-grabbing visuals (Guy Hoare's low, shadowy lighting design just about stays on the right side of the atmospheric/murky divide) it is, rightly, all about the characters in the end.

The Seagull by Anton Chekhov in a version by John Donnelly is booking until the 1st of June at Richmond Theatre; then continuing on tour to Bath and Derby.