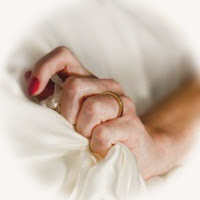 Married for 25 years, Eleanor (Zoë Wanamaker) and James (Owen Teale) are in their fifties, grandparents, with both their love and mutual sexual attraction seemingly undimmed by time. When their friend dies, he leaves behind the much younger woman he left his wife for. The couple remain on friendly terms with Kate (Annabel Scholey) but her request for James' help in researching a book has an ulterior motive: Kate makes a habit of going after older married men, and he's her new target. Peter Nichols' Passion Play arrives in the West End in a revival from David Leveaux, and appears at first to be a pretty straightforwardly told story of infidelity, as James' initial dislike of Kate starts to give way to her vampish charms, until eventually he finds himself in love and obsessed. But about 20 minutes into the play it takes an unexpected stylistic turn.

This is when Oliver Cotton arrives as Jim, essentially a representation of James' inner monologue, and he supplies the doubts and truths behind the lies the character actually speaks out loud. Later in the first act, when Eleanor finds out about her husband's infidelity, we also get to meet her own alter-ego, Nell (Samantha Bond.) The two characters spread between four actors proceed on a bit of a mental dance as they try to unravel their new situations and emotions. 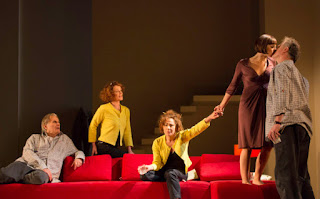 Obviously Leveaux's production has a strong cast (also including Sian Thomas as Agnes, the previous scorned wife with a Machiavellian streak of her own) giving Nichols' play a sparkling reading on Hildegard Bechtler's attractive, clinically modern set. There's powerful emotion as well as some biting comic lines, with Bond getting a lot of particularly sharp barbs to deliver. And it's an interesting play, in its first act at least. James is a restorer of, mostly religious, paintings, Eleanor a music teacher and choral singer, both atheists whose jobs mean their lives are steeped in Christian imagery, and this gives another meaning to the title Passion Play. I did find the character of Kate a bit problematic - a rather two-dimensional temptress, if the play didn't have a strong, sympathetic female character in the Eleanors it would risk feeling misogynistic. 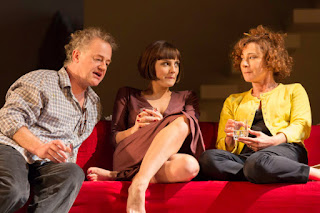 But overall I was enjoying this by the interval, though I commented to Laurie that I wasn't sure where the story had left to go when it returned. And we did both find the second act disappointing - it opens with a red herring that a threesome is on the cards, and though this would have perhaps had a bit too much of the element of wish-fulfillment, I think it might have been a more interesting avenue to explore than the more realistic, but less engrossing developments that follow. We also start to see the alter-egos being used in different ways: Bond and Cotton start to actually play the outer selves in a few scenes, which I interpreted as them starting to communicate without filters. But then the two pairs of actors are also used to show the couple at different times simultaneously. The blurring of the lines is effective in conveying the chaos the marriage is falling into, but the different amount of ways Nichols finds to use them starts to confuse, and feel as if he got so pleased with the dual-actor conceit he tried to milk it in every way he could think of. 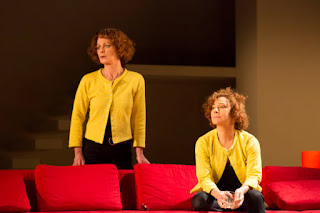 Ultimately there's a lot that's good, and interesting, about Passion Play in this production. But it also proves frustrating on a couple of different levels.

Passion Play by Peter Nichols is booking until the 3rd of August at the Duke of York's Theatre.