Theatre review: Travels With My Aunt

PREVIEW DISCLAIMER: Travels With My Aunt invites the critics in on Wednesday. 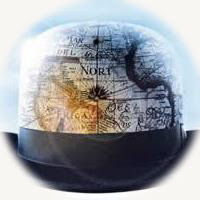 It may continue to be a hit factory, but sometimes the Menier Chocolate Factory makes some very odd programming choices. After last year's aunt-related nostalgia trip we now get another in Graham Greene's Travels With My Aunt, in Giles Havergal's 1989 adaptation, revived here by Christopher Luscombe. Henry Pulling is a retired bank manager who's played things safe all his life. At his mother's funeral he meets her estranged sister, his Aunt Augusta, for the first time, and is sucked into a more bohemian world: Augusta's life has been one of torrid affairs (with an unfortunate preference for war criminals,) smuggling and the worldwide travel that comes with it. In an attempt to finally connect with her nephew, Augusta brings Henry along on her latest series of adventures across Europe, and eventually across the Atlantic to end up in Paraguay - but not before she reveals a few shocking truths about his family history.

Havergal's adaptation adopts a storytelling approach, using four actors: David Bamber, Jonathan Hyde, Iain Mitchell and Gregory Gudgeon are all dressed as the buttoned-up Henry (although only the first three play him, as well as the majority of other characters.) They alternate the role of the narrator, with Hyde taking on Aunt Augusta, Mitchell her various lovers and Bamber an American family whose members they meet around the globe. I have nothing bad to say about their performances, which they fully commit to and have a lot of fun with.

But this production just feels out of place at the Menier: A four-handed storytelling piece that doesn't even come with a new adaptation seems like a cheap bit of filler until their next blockbuster (although even here there's been cash ostentatiously spent on Colin Falconer's stage design, an old-fashioned railway station whose waiting rooms and ticket booths become the set, its lost property department houses the props.) The unnecessarily elaborate set just makes it more obvious that this is a kind of theatre more at home in an intimate fringe venue on a bare stage, not with a company that makes regular assaults on Broadway and charges accordingly.

Travels With My Aunt doesn't make a bad fist of this kind of storytelling but neither does it have anything to contribute either, and its comedy runs out of steam - David Bamber playing flirtatious teenage girls is funny, but only the first couple of times. I'd say this character-juggling style may be new to the Menier's usual conservative audience, but surely a large proportion of them will have at least seen The 39 Steps, which does this sort of thing better. That, or even better a fringe production by one of many cash-starved companies that's perfected this kind of minimalist staging out of necessity, would be a better option than this.

Travels With My Aunt by Graham Greene, adapted by Giles Havergal, is booking until the 29th of June at the Menier Chocolate Factory.