Theatre review: Over the Bridge 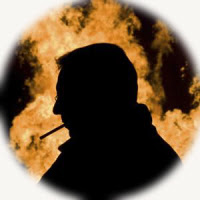 A rediscovery from 1960, when it caused some controversy in Northern Ireland, Over the Bridge was the first stage play by Sam Thompson, a lifelong worker and union man in the Belfast shipbuilding industry. The play focuses on the trade unions and the way they affected day-to-day work in the 1950s, but also looks back at the mass unemployment of the Great Depression, and forward to how bloody The Troubles would become in the subsequent decades. At the centre of the large cast are union representatives Rabbie (Sam O'Callaghan) and Davy (Robert Calvert,) who form the main line of communication between the workers and the head foreman, Mr Fox (Alan Mooney.) There's an array of problems large and small that threaten daily to halt work under strike action, but as sectarian differences start to become more of an issue, Thompson predicts the threat of physical violence becoming part of daily life as well.

Director Emma Faulkner has a tough job on her hands marshaling 13 people across the Finborough's small stage and Philip Lindley's Rooms set (as usual uncannily well-adapted to a very different show,) and she has mixed results with a tricky play. Over the Bridge's biggest problem is in the trade union business that forms much of the play's core. Thompson certainly puts across the frustration of trying to work to a deadline while satisfying union demands and those who might wish to exploit it. It's perhaps a bit too accurate a portrayal though, as it's not the most interesting thing to watch, and the endless parade of men with grievances is hard to stay on top of - I had to take frequent peeks at my programme to remind myself who everyone was talking about. 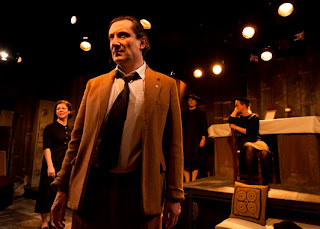 This really drags most of the first act down but a first saving grace comes when we get a glimpse of their home lives, and the world of men is broken up by some strong female performances. Melanie McHugh as Rabbie's wife is warm and funny, Amy Molloy as Davy's daughter has some powerful scenes later on in the play, and Caitriona Hinds as his sister-in-law makes for an entertaining harridan. The darker second act also picks up the pace as an IRA bomb at the shipyard leads to violent anti-Catholic feeling, and a couple of the workers find themselves in real danger. 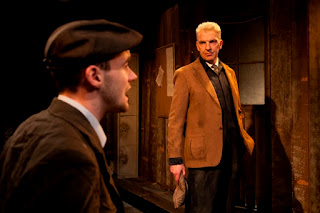 There's definitely some interesting touches in the play's exploration of the union and the vast difference in its importance to various members: For all his eye-rolling at the hold religion has on some of his co-workers Rabbie treats the little blue book of union rules with more respect than any bible. Having been seen as a troublemaker in his youth, Davy's belief in the system is now less vocal but may go deeper. And his future son-in-law Baxter's (Chris Robinson) view for the future is a more pragmatic one. Workplace disputes can, in contexts like this one, be an important issue with far-reaching consequences, but they're a very hard subject to create compelling theatre out of. Thompson and Faulkner succeed only partly in solving this problem.

Over the Bridge by Sam Thompson is booking in repertory until the 14th of May at the Finborough Theatre.