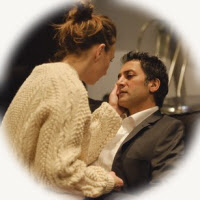 An explosive approach to race relations seems to be a popular way to impress the Pulitzer judges; this year's winner in the drama category was Ayad Akhtar's Disgraced, which sees a dinner party for two interracial couples go horribly wrong. Amir (Hari Dhillon) is a reasonably successful corporate lawyer, a Pakistani-American who changed his last name from Abdullah to Kapoor to put people off the scent that he was raised a Muslim. His white wife Emily (Kirsty Bushell) is an artist; in contrast to Amir who is vocal about having rejected his family's religion, Emily makes paintings that overtly acknowledge the influence of Islam on Western art. Their marriage seems pretty happy on the surface, but their disagreements over religion are a recurring issue - Emily's insistence that Islam is not inherently hate-filled coming up against her husband's argument that his upbringing says otherwise.

Part of the reason Amir distances himself from Islam is for his career at a Jewish law firm, so when Emily and his nephew Abe (Danny Ashok) convince him to take a public stand on an Imam (falsely?) accused of raising money for terrorists, he feels that he's putting a lot on the line. The aftermath is seen at the dinner party a few months later: The guests are Amir's black colleague Jory (Sara Powell) and her husband, white Jewish art dealer Isaac (Nigel Whitmey.) In the course of the evening all their backgrounds will come under scrutiny, and the causes of Amir's self-loathing prove hard to stomach. 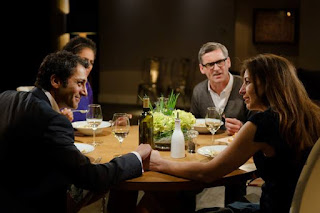 Nadia Fall directs an excellent cast on Jaimie Todd's traverse set, a New York apartment generically decorated but with tiny touches of Islamic design - these will of course turn out to be Emily's contribution, not Amir's. And there's a lot of passion on display, bringing up some controversial ideas. But I also found Disgraced a mixed bag, its good points balanced out by some contrived set-up (how did Amir and Emily ever get together in the first place when the things they define themselves by are so diametrically opposed) and developments that are a bit too easy to guess (the appearance early on of a lovable, laid-back young Muslim seems a guarantee that by the end he'll have become radicalised.) 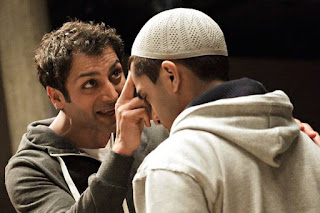 Akhtar's controversial revelation of where Amir's protestations against his religion truly originate is a very powerful moment, and the kind of thought-provoking argument theatre seems to make better than any other medium - this is a play that caused a lot of audience gasps tonight. And there's great performances all round, Dhillon negotiating a difficult role as the unlikeable protagonist. Bushell is always worth watching and gives us layers to someone who could just be a liberal stereotype. Powell gives Jory a no-nonsense determination to keep things light and breeze through the evening, that explodes into something spectacular when things go too far. And the actors also have a couple of excellently-choreographed (by Kate Waters) fight scenes. 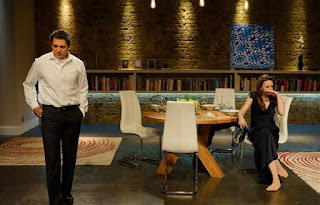 Plays without likeable characters, like Disgraced, need something else to keep you invested and although at times the play manages this it's not entirely able to do so throughout. There's some very powerful moments here but they're not always elegantly strung together, the cast doing much of the work to keep the evening as successful as it is.

Disgraced by Ayad Akhtar is booking until the 29th of June at the Bush Theatre.