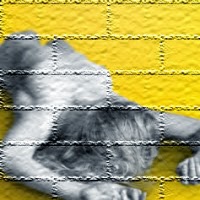 The Vault Festival is an annual(ish) event that takes place underneath Waterloo station, in railway arches on the opposite side of the graffiti tunnel from where the Old Vic Tunnels used to be. It's a slightly less chaotic space than that was, a main corridor with doors to various performance spaces on each side, and a bar at the end (followed by a magical mystery tour should you need the loos.) As well as music, the programme comprises fringe theatre shows, most of which are only playing for a week. There's a couple of headline shows that'll be playing straight through the festival though, and the one I chose was The Cement Garden, which David Aula and Jimmy Osborne have adapted from Ian McEwan's novel about four siblings who lose their parents and have to find their own path to adulthood - what turns out to be an insular, creepy path.

For tonight's performance, understudy Christopher Webster played the leading role of Jack. Given how slickly everything about his performance and those around him came together, I take it it was known that usual lead George Mackay might become unavailable, and the cast change was fully rehearsed. If it hadn't been for the understudy notice on the door you wouldn't know that Webster normally plays a number of smaller roles, which director David Aula took on tonight. 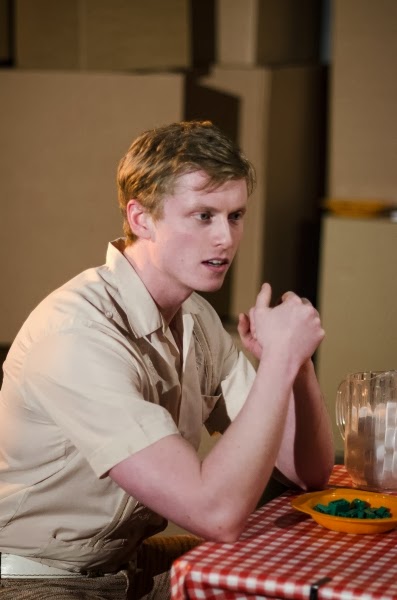 Jack is narrating the story to his brother Tom (a puppet made of cement sacks and voiced by David Annen,) who was too young at the time of the events shown to really remember or understand them. Their brutal father having died of a heart attack while trying to cover the garden with concrete, their mother (Victoria Gould) succumbed to a long illness soon after. Believing they'd be separated and put into care, Jack and sisters Julie (Ruby Bentall) and Sue (Georgia Clarke-Day) decide to keep their mother's death secret and bury her in the basement. When Julie gets a boyfriend (Aula,) he not only literally smells something wrong, but excites jealousy in Julie's brother. 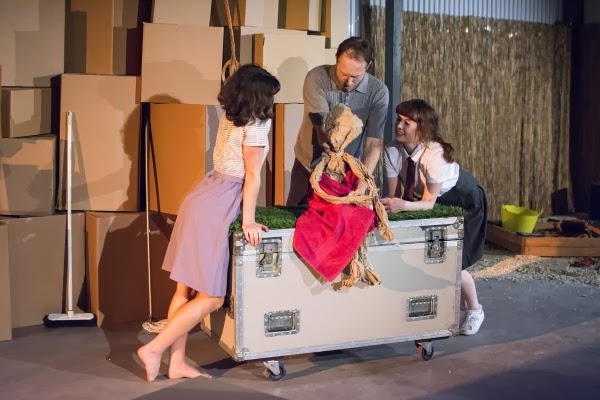 Aula's production takes place over two levels, with the audience seated on the ground where most of the action also takes place, but the actors also spend a lot of time on metal gantries overhead, where the bedroom and bathroom of the house are set. It's not the most comfortable of setups for the audience, but fortunately the production is hectically paced, meaning you're never stuck craning your neck in one direction too long as the action quickly moves elsewhere; although it can be frustrating when something seemingly important ends up taking place behind a pillar. 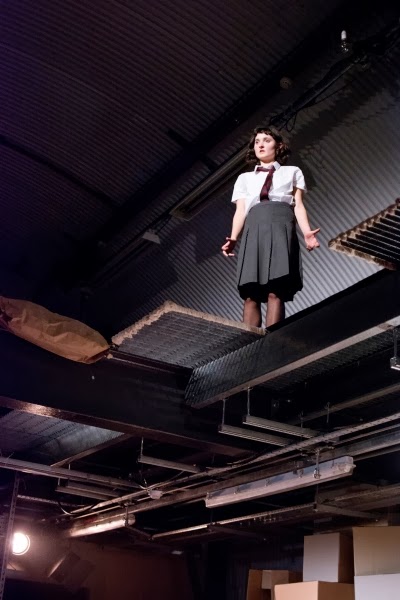 But for the most part this almost-immersive staging is effective, Webster acrobatically pulling and throwing himself around the set. Its energy feels slightly at odds with the story it's telling though, the creepiness of Jack's incestuous feelings for his sisters not fully acknowledged and therefore making the evening feel uncomfortable in the wrong ways. Full-on performances from the cast though, and an interestingly ambitious staging even if it doesn't always pay off.

The Cement Garden by Ian McEwan, adapted by David Aula and Jimmy Osborne, is booking until the 8th of March at The Vaults, Waterloo.