Theatre review: The One 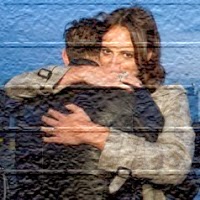 Ian had just turned the conversation - I'll leave you to guess if there was a gleeful tone to his voice - to the early closure of Andrew Lloyd Webber's latest musical, when the house lights went down and "Music of the Night" started to play. The love song from Phantom recurs over the next 75 minutes as the backdrop to another unhealthy relationship in Vicky Jones' The One. University lecturer Harry (Rufus Wright) and his long-term girlfriend - originally his student - Jo (Phoebe Waller-Bridge) are staying up throughout the night, waiting for news of Jo's sister, who's gone into labour. Prompted by a late-night visitor, the couple confront each other and their relationship, revealing it to be a viciously antagonistic one that seems to thrive on them permanently goading each other into obnoxious behaviour, and with a sexual power play that's uncomfortable to watch.

Anthony Lamble's set design places the couple on a large raised square that gives the couple's interactions a bit of the feel of a boxing match, but while there are a few moments of physical violence much of the damage is inflicted verbally. Not just on each other - Lu Corfield's Kerry, a colleague of Harry's who's smitten with him, pays two visits during the night and becomes the pair's punching bag between bouts. As with so much drama that puts a fiery relationship under the spotlight, Jones' play presents us with at least two characters we'd actively cross the street to avoid (without even checking if there was traffic) but who make for an at times fascinating dynamic on stage. The romantic cliché of The One turns into two people who are surely the only ones who'd put up with each other. As a result there's an underlying feeling that Jo and Harry know full well their relationship is harmful to both, and that while neither is willing to be the one who leaves, they seem to be constantly pushing each other to be the one who ends it. 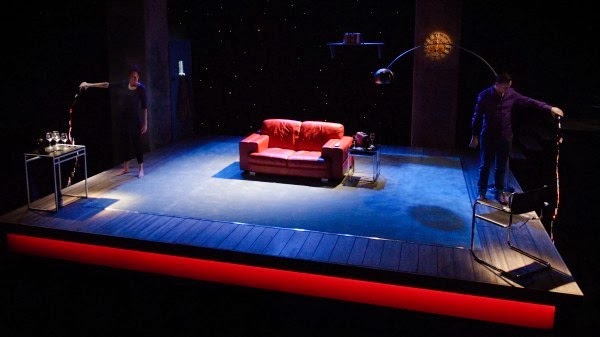 Steve Marmion's production marks the passing of the hours with the actors tipping away the wine their characters would have got through, and turning the clock hands forward as each hour passes. Jones does provide some sharply funny lines in among the battles, and Waller-Bridge is of course an actor who can make the most shocking material entertaining. Unarguably powerful, but just as unarguably nasty as well.

The One by Vicky Jones is booking until the 30th of March at Soho Theatre.